‘Pushed like cattle’ – The Case of Racial Profiling in Germany 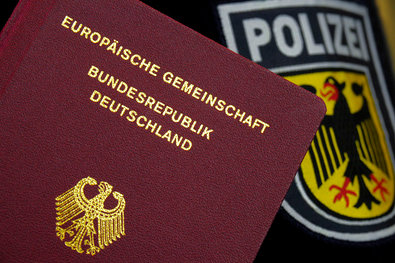 One incident, two verdicts. On his way to Frankfurt a man is controlled by police officers. His black skin soon becomes a matter of harassment and humiliation. The 25 year-old compares the demeaning treatment to methods used in the Third Reich by SS-paramilitaries.

Now two courts have ruled that both is lawful: police controls without suspicion based on features like the color of skin as well as the young man’s comparison. The case could give rise to a long-overdue debate about the practice of Racial Profiling in Germany.

So far, the only decision that has proofed legally valid is the ruling which backs expressing memories of National Socialism.

‘To me this is structural racism’

Around Christmas time in 2010, a 25 year-old student is on the train from Kassel to Frankfurt in the central German state of Hesse. The man has a German ID and was raised in a small village in the area. His German reveals no accent at all. Only the black color of his skin draws the attention of some federal police officers who demand his passport – once again. Later the man who does not want his name to be made public will state:

I used to be scrutinized many times before. To me this is structural racism.’

He asks for the reason behind the control but the officers make no reply to the question. Only much later, in court, one of the officers frankly admits that it was the color of skin.

On the train, the man refuses to follow the police instructions. After a verbal clash the officers force the man out of the train at a stop along the route:

I was pushed out of the train like cattle.’

Outside, humiliation continues. Officers disrespectfully address the man with the word ‘du’, which in German is rather used in familiar relations but certainly is not appropriate in a conversation between public servants and citizens.

During the procedure the student’s mobile phone gets broken. Officers of another police unit are sent for. At their arrival they find two bars of chocolate in his bag and ask the man, whether he had stolen them.

Offensive words are dropped: ‘Shove it!’ Police officers snub bystanders who try to interfere, telling them they had no rights whatsoever. 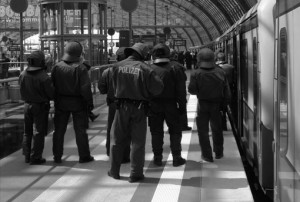 At some point of the heated verbal exchange the 25 year-old mentions that he feels reminded of ‘SS-methods’, hinting at the manners of Hitler’s so called Schutzstaffel, a major paramilitary organization of the Nazi regime and known for its many crimes against humanity.

The SS-comparison was rated as libeling an official and the man was later charged by the district court in Kassel. But with a so called leap-frog appeal the student litigated another cause. Now the Higher Regional Court of Frankfurt has acquitted him. In the face of a control which he felt to be discriminating, the man was backed by freedom of speech when ‘criticizing the officers’ behavior with strongly defiant language’, the judges say.

What is important here is that the man explicitly did not call the police men Nazis in person but simply denounced their practices.

The defendant proofed that he could differentiate between objective criticism […] and personal defamation’, the verdict reads.

Racial Profiling made lawful in Germany

The question whether police controls based on the color of skin are legal at all was not part of the trial. This cause was then tried at the administrative court in Koblenz where the responsible police authority is based – and at first instance the court proofed such controls without suspicion to be lawful.

When fighting so called illegal immigration, officers were granted the right to ‘choose people according their outward appearance’, the judges decided. The court limited its verdict to train routes which in the eyes of police are regularly used for so called unauthorized entry into Germany. This is certainly not the case for the route between Kassel and Frankfurt which runs far from any boundaries with neighboring states. According to police data, not more than forty persons without legal documents are detected here per year.

If necessary we take this cause all the way to the European Court of Human Rights in order to have the verdict rescinded.’

In criticizing the verdict the advocate denounces the so called Racial Profiling. The term describes the control of persons due to their color of skin or presumed origin and has sparked a heated debate in the US.

Although Israel is the only European state to officially practice Racial Profiling, also known as Ethnic Profiling, human rights observers claim it was also daily routine among German police and authorities in other European countries.

While the Koblenz verdict may have legally backed the long-since method in first instance, the Human Rights Committee of the United Nations in 2009 unambiguously ruled that it is a form of racist discrimination.

Like here in Munich, flash mobs in remembrance of murdered Trayvon Martin raise awareness for the issue of Racial Profiling.