A new concept for Africa: Germany aims at the troops 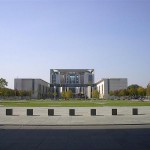 Germany shapes a new political approach towards Africa. A strategy paper describes the neighbouring region as a “continent on the rise”. The plan emphasizes the idea of empowering, but reveals old lacks of perception.

The German Bundeskabinett – the chief executive body of the biggest economic power in Europe – has presented its new official strategy concerning the relationsships between Germany and 55 different countries on the African continent.

On our neighboring continent many good developments like growing prosperity and successful regional cooperation have – as well as conflict and terrorism, such as migratory pressures and political instability – immediately consequences for us in Europe. (Steinmeier, Auswärtiges Amt 2014)

Basic objectives of the concept lay in the strengthening of regional responsibilities by promoting the ideas of “good governance”, rule of law, economic development and crisis prevention.

Actively Germany would like to support African training institutions with military and police trainers and the establishment of a police unit of the African Union (AU). (Auswärtiges Amt 2014)

The new guidelines of the federal government are the result of an extensive consultation process that the Foreign Office has launched earlier this year. They replace the previous concept for Africa of 2011. The new guidelines shall – as it is said, “interlink the commitment of the individual departments more than ever with each other in order to react quickly, decisively and effectively than before”.
On the bottom line, Germany still tries to combine its policy towards a vast variety of complete different countries within a sample of common guidelines. Therefore the strategy applies to Algeria and Eritrea as it does to Egypt, Ghana or South Africa. The only argument to defend this approach seems to be: They are all somewhere located down south on the same continent. And, even more dangerous: Military assistance still seems to dominate political interaction.
The new “Afrikapolitische Leitlinien der Bundesregierung“: Auswärtiges Amt (pdf, German)
Diesen Artikel empfehlen bei:

View all articles by admin