In Cape Town people took to the streets to demand an end to the current shark killings off the Western Australian coast. Protestors fear the killings might even have a negative effect on South Africa’s Great White Shark population. Today, Western Australia’s Premier Colin Barnett, the initiator of the “catch-and-kill-policy”, held a keynote speech at the “Investing in African Mining Indaba” as part of an official tour to Zambia and South Africa. Meanwhile, about 200 people protested the shark killings. 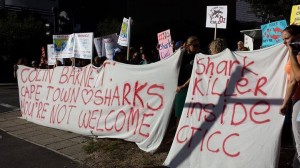 Currently, in the waters off the Western Australian coast, baited drum lines are installed in order to catch large sharks. Any tiger, bull or great white shark which is  larger than three meters is supposed to be shot.

In South Africa, criticism in view of this new policy in Australia rises. Before the start of Premier Barnett’s journey to South Africa, protesters already expressed their view on the current shark killing actions in Western Australia by stating:

Western Australia’s short-sighted decision to cull large sharks will potentially affect great white shark populations in South African waters [...] which has a knock-on effect for our marine-eco-systems, as well as many local businesses.”

All footage by Grahame Bowland