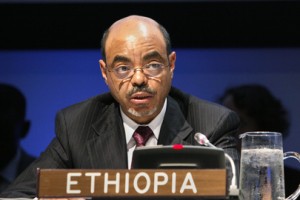 The news from Addis Ababa and Brussels are contradictory. According to a AFP source, Ethiopia’s head of state is

in a critical state, his life is in danger.

Other sources further add that he is still alive. Reports state that he had been under treatment in Belgium’s capital city Brussels which is not confirmed yet.
However government spokesman in Addis Ababa Bereket Simon told news agencies that Zenawi is in good condition. He is further stated having said over the rumors of critical health conditions that they were created by

an interest group which has preoccupied itself in disseminating such untrue stories.

Zenawi is Ethiopia’s head of state since 1991 and is seen as an important partner for the USA and other countries in the Horn of Africa.
It remains to be seen what the postponed press conference of the Ethiopian government end of this week will bring.