DRC Elections: The polling stations are opened, voters are ready 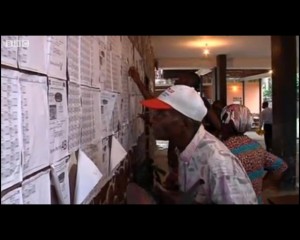 BBC Africa about today's elections in the DRC, source: bbc.co.uk

BBC Africa as well as Al Jazeera reported about the opening of the polling stations in the Democratic Republic this morning. While several irregularities have been reported, people are swarming to the polling stations to vote for presidential candidates and a new parliament.

It needs to be waited what the day of elections brings and if it stays peaceful. The voters are ready. They are ready for political stability and a peaceful future for their country. But still the fear of violence is enormous. People fear the several armed groups which are still very numerous and are still operating on Congolese territory. So far there are no incidences reported. But the Election Day is still long.

Read and watch more about the current situation of the Election Day in the Democratic Republic of Congo: