Egypt in a critical state 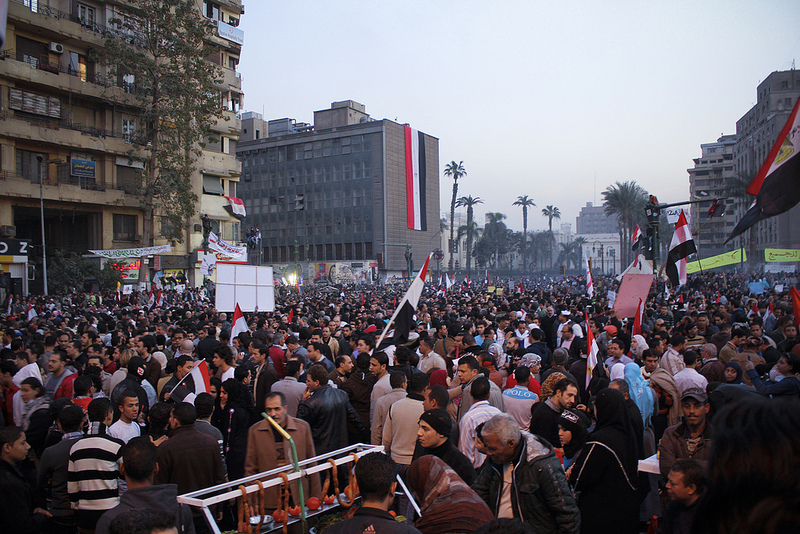 Since the second anniversary of the “Friday of anger”, the day protestors first occupied Cairo’s Tahrir Square to denounce former president Mubarak, clashes between demonstrators and Central security continue throughout Egypt for the fifth day with a death toll of over 50. With this summary of the latest developments, Abdallah Farid gives a glimpse at the atmosphere in Egypt.

Especially the death sentence inflicted on 21 residents of Port Said sparked anger. Protesters on the streets direct their anger primarily at President Morsi whom they accuse of consolidating power in the hands of his Muslim Brotherhood. Meanwhile supporters of Morsi say the opposition was trying to use the power of the street to unseat Egypt’s first democratically elected leader. Again, the current protests underscore the long-standing tensions between protesters and the police, a force long accused of abuse.

In Cairo, two people were killed near Tahrir Square on Wednesday. Their identities were not immediately known but medics said they had both been hit by buckshot.
Their deaths bring the number of people killed in Cairo to four, with 50 left death nationwide since violence erupted late Thursday. This prompted Egypt’s defense minister Abdel Fattah al-Sissi to warn that the crisis could lead to the collapse of the state.

We want an immediate meeting between the president, the ministers of defense and interior, the ruling party, the Salafist movement and the National Salvation Front to take urgent measures to end the violence and begin a serious dialogue.”

Former chief of the Arab League and another NSF leading figure, Amr Mussa, said “the serious current situation” required the acceptance of dialogue “in order to stop the confrontations and the violence.”

People in Egypt are also angry for scheduling a two leg meetings with Germany and France as Morsi flew Wednesday to Berlin for talks with chancellor Angela Merkel in a visit that had been scheduled to last for four days but was to a three hours stay in Berlin while the trip to France was totally cancelled.

Morsi’s reception in Berlin had initially been planned as a high profile event but as political developments in Egypt took a turn for the worse, German authorities toned down their welcome. The intension, says a source in Berlin was to send the message that while Germany remains supportive of Egypt during its difficult transition officials expects the executive power to meet democratic expectations.

Also German politicians made clear that financial aid was dependent on progress towards democracy, with several politicians expressing their fear that Egypt was sliding towards dictatorship.

German chancellor Angela Merkel pressed the point home saying she had “made clear” to Morsi that help from Germany required Egypt’s leadership to prove that it was working towards building a free society:

Of most importance is that there is always a line of communication with all political powers in Egypt, that the various political powers are able to play their part, that human rights are observed … and above all that religious freedom can thrive.”

Merkel urged Morsi to give democratic developments “all the room they need” to flourish. Morsi has sought to reassure the German government that he is committed to leading his country on the road to democracy as he seeks funding and relief on €240 Million of debt amid concerns that his country is sliding into deeper chaos. Morsi also confirmed that Egypt was on the path to becoming “a constitutional state – it will be a civil state, it will not be of military or theocratic nature – a state which will allow all range of opinions to be expressed and will enable a transition of power”.