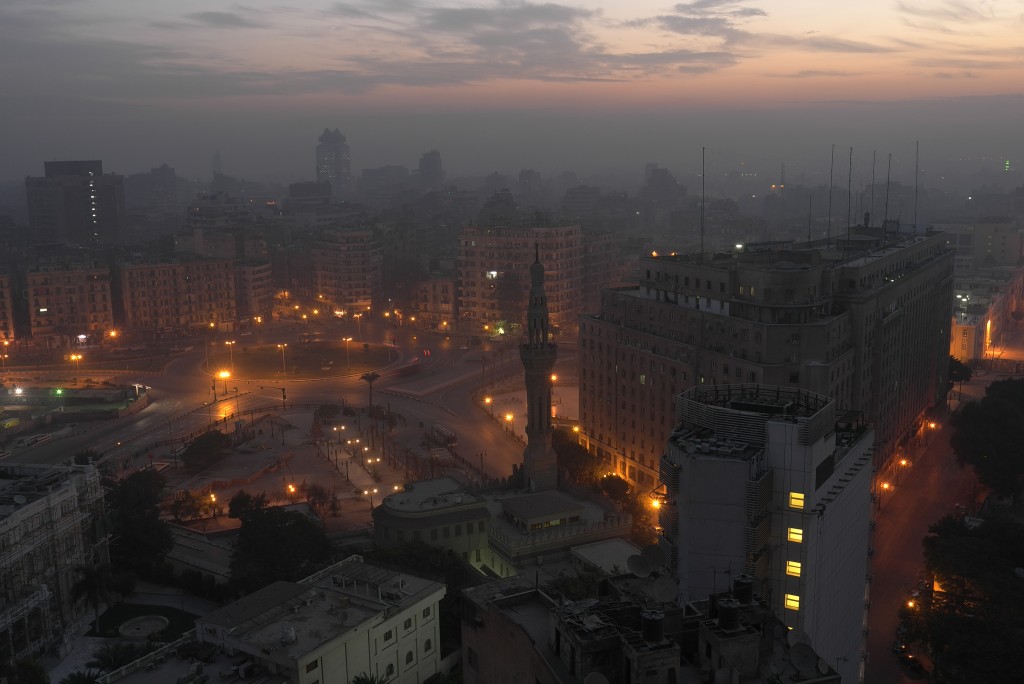 A new dawn? Lights are still glowing at Cairo’s Tahrir Square in the early morning as the constitutional assembly announces agreement over the new draft. © Frank Schulenburg

In Egypt the assembly that was charged with crafting the county’s new constitution until January today hastily passed a draft, avoiding threats of dissolution. After 14 hours of haggling, voting on all 234 articles separately, discussing objections by dissenters and making alterations, members came to an agreement. President Morsi is to receive the draft on Saturday. He already announced that the draft should soon be challenged by a people’s referendum after he was hardly criticized for trying to extend his power recently. Tens of thousands went out to the streets to denounce the draft.

“Agreement by consensus. May God bless you.” Hossam El-Ghiryanin, the head of the assembly, seemed rather relieved than solomn when after a 14 hour debate at 6.30am local time he announced that all 234 articles had been agreed on by 85 out of 100 members. The room broke into applause backed by Egypt’s national anthem. El-Ghiryanin said the new draft which is designed to replace Egypt’s 1971 constitution would be written by himself later today and was to be presented to President Morsi on Saturday.

The draft limits the time in office for the president to two four-year terms. It further introduces a form of civilian supervision of the military establishment. However, the defense minister will still be chosen by the armed forces; the army will remain insulated from parliamentary oversight – although a special council that includes officers will oversee military affairs and the defense budge – and military courts will still be able to try civilians.

Shura Council (the upper, consultative house of Egypt’s parliament) where the assembly had gathered according to one member had temporarily been transformed into “an army fortress”.

The draft keeps in place Article 2 defining “Principles of Sharia” as the main source of legislation. However, a new article says Cairo’s al-Azhar University, home to some of the leading authorities in Sunni Islam, must be consulted on any matters related to Sharia.

Freedom of worship is limited to followers of the three Abrahamic religions Islam, Christianity and Judaism which would exclude minorities such as Bahai’i, who have complained of being persecuted in Egypt before.

The draft calls for freedom from discrimination, but does not specify whether women or religious minorities are protected.

There are also contradictions in the articles protecting freedom of expression and those protecting people or religions from “insults”. The draft also provides for “society” to play a role in promoting “family values”.

President Morsi, who is a member of the Muslim Brotherhood’s political offspring Freedom and Justice Party (FJP), on Thursday said that he expected the referendum on the draft to be arranged “very soon”. Still, he described the constitutional draft as

a difficult birth from the womb of an ancient nation. The most important thing of this period is to finish the constitution so that we have a parliament under the constitution, elected properly, an independent judiciary, and a president who executes the law,” Morsi added.

consigned to the garbage bin of history”.

El Baradei added the draft would only exacerbate the current divisions in Egypt. Today tens of thousands went back to the streets to denounce the draft.

Kamal Saleh, the chief negotiator of Egypt’s Coptic Church at the assembly board, said it was

not the constitution of Egypt”.

The Church, whose members make up to 10 percent of Egypt’s population, boycotted the vote.

The hasty nature of Morsi’s call to approve the draft constitution adds to Egyptians’ discomfort about the current state of politics. The crisis is far from over as the constitution needs to be approved by the citizens, many of whom are angry about the government’s latest decisions. The last days hundred thousands protested saying Morsi was trying to grant himself unchecked power.

Critics call the maneuvering an attemt of the Muslim Brotherhood which they claim to plan hijacking the constitution less than two years after Mubarak was ousted. After the Copts had officially left the assembly as a bloc together with many liberals, the board was dominated by rather regressive figures, some with strong religious references. Still, members emphasized that Egyptians from different backgrounds were taken into consideration when creating the draft.

Others interpret the vote as a way to quickly defuse anger about the president’s recent decree. Many Egyptians, though, are believed to agree with the draft constitution as they hope it will end the political division and make presidential decrees a memory of the past. Others claim such constitution could lead to excessive restrictions on certain rights, as Egypt would move closer to sharia law. Also, there aren’t really any protections for women – a point in which some say, even the 1971 constitution was much more progressive.