The Eritrean government has rejected reports by Kenyan army which got the country into trouble evoking it’s renewed accusation of backing the militant al-Shabaab group in nearby Somalia. Since the Kenyan army entered Somalia last month the international focus lies solely on the situation in Somalia making it appear a national problem. However the current spread of unconfirmed information and devious propaganda disguises the increasing tendency towards another proxy war in the Horn of Africa.

Unconfirmed reports by Kenyan army spokesman, Emmanuel Chirchir, stated that there had been two planes landing in central Somalia’s town of Baidoa this week. According to Chirchir, the planes, the origin of which could not be determined, delivered weapons for the militant al-Shabaab group. Al-Shabaab as an off-shoot of the Islamic Courts Union has become the major opposition force to Mogadishu based Transitional Federal Government (TFG) and is recently controlling large parts of south-western as well as northern Somalia. The accusations appear even more striking against the background of the 2009 economic sanctions, which the UN imposed as a reaction to Eritrea’s alleged interference in Somalia.

In a rare statement Eritrean Minister of Foreign Affairs now rejected any accusation of this kind, calling them “pure fabrications“. He claimed his country’s support for the UN-backed desire to achieve the peaceful establishment of a central government as the key player towards a “Somali owned political process”. He further stated:

Eritrea’s sole interest in Somalia is to see peace and stability return to this important Horn of Africa country and an end to the suffering of the Somali people.”

Already in the past an UN monitoring group accused Eritrea of violating an arms embargo, which was imposed in 1992 as a result of the United Nations Mission in Somalia (UNOSOM I) and renewed afterwards, last on July 29th 2011. Since the end of direct confrontation, which resulted in Eritrea’s political independence after a 30year uprising, both Eritrea and Ethiopia are said to lead a proxy war in nearby Somalia, where both parties are supposed to finance rival groups.

Hinting at the seemingly unpredictable allegiances in the region, anthropologist Jon Abbink characterizes the complex situation in the Horn of Africa to be minted by politics of proxy war, resembling a chess game, “in which the rules constantly seem to change.” In the context of deep tension and distrust generated by decades of war in the region leaving behind huge flows of internally displaced people and a consistent threat to the power of the reigning elites, the danger of proxy wars appears to be permanent.

In a war-torn society like the Somali one, reigning elites include businessmen and warlords rather than political ones. The ratio between these non-governmental actors and the TFG ranges from mutual apathy to violent rivalry. Meanwhile some sources quote the UN Monitoring Group for Somalia estimating al-Shabaab’s annual income to be between 70 to 100 Million US-Dollars. This figure alone – although just estimated – partly explains al-Shabaab’s dominant role in Somalia. In possession of armed force, a group which itself states the number of it’s members to be barely more than 14.000 in a country nearly as big as France is able to exercise great power over a defenceless population – particularly in the current situation of extensive famine. 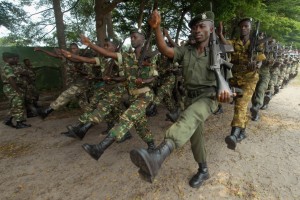 Kenya, whose military is operating in southern Somalia in fight against al-Shabaab since October, pledged to launch airstrikes to destroy arms delivered to the group. Kenya’s intervention mainly occured as a result to the direct affront by al-Shabaab’s bombings in capital Nairobi which demonstrated the group’s regional expansion. Recently also Uganda again signalized willingness to a military involvement in Somalia – one of the world’s most armed regions according to the UN, which estimates the circular of so called small armes and light weapons (SALW) in the whole Horn of Africa “in the millions“. Meanwhile the African Union offensive AMISOM (African Union Mission in Somalia) continues it’s operation with contribution from neighbouring Djibouti and others. Ethiopia, although having withdrawn it’s military after a renewed military engagement in 2009 preceded by a 2006 blitzkrieg style invasion, is accused of further (financial) support for seperate movements in Somalia.

Some observeres also critically point to the U.S engagement in the Horn of Africa. In the aftermath of it’s commitment against the so called islamistic terrorist threat, the U.S. have gathered a loyalist group of “mercenaries” in fight against al-Shabaab which is allegedly linked to al-Qaeda. The Horn’s general strategic relevance is underlined by the U.S. annual donations excluding weapons, with Kenya (6th), Sudan (7th) and Ethiopia (9th) listing three major players of the region among it’s worldwide top recipients.

Moreover WikiLeaks published documents which reveal further inofficial activities of the U.S. in Somalia in the context of the Ethiopian invasion. Recently both the TFG as well as the U.S. negotiate with Ugandan President Museveni about the sending of Ugandan troops to Somalia respectively about an agreement on a long-term military partnership.

Some experts consider the increasing number of alliances behind the scenes to be an outcome of both cold war strategies and newly arising nationalist as well as separatist movements. Despite the embargo many groups are – indirectly – supplied by the international arms industry, which distributed huge amounts of weapons for decades and besides international conditions in the context of the regional arms embargo still does. An UN report for example mentioned a drastically increasing amount of arms right in the approach of the establishment of the TFG.

In view of the region’s state of permeability the recent reports on arms supply linked to Eritrea therefore only cast a light on a much more systematic arms trade in the whole Horn of Africa and it’s interconnection with ongoing cross-broder conflicts.

Crisis Management and the politics of reconciliation in Somalia

Opinion by Kakungulu-Mayambala: “Uganda/Somalia: “Region Should Withdraw Troops from Somalia”

Opinion by Salim Lone in The New York Times: “In Somalia, a reckless U.S. proxy war”

Whose Peace is it anyway? Connecting Somali and International Peacekeeping