EUROSUR: Rescue at sea? Just another part of the EU’s interception strategy against refugees 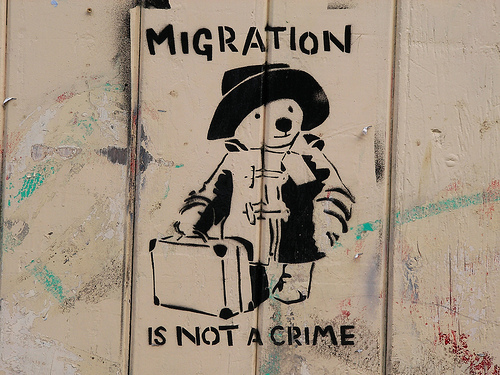 The EU’s latest surveillance system will help detect refugees. But EUROSUR is not the sweet-tempered humanitarian solution that politicians like to call it.

The EU Parliament has approved the European border surveillance system (EUROSUR) that sees the installation of satellites and drones in order to monitor migration routes in four areas (see map). The system is said to begin operating by the end of this year.

EUROSUR has not been passed as a response to the latest catastrophe off the Lampedusa coast, though, as some politicians claim. The bill has been prepared since 2008. The current debate about refugees might at least direct some critical attention to the system: 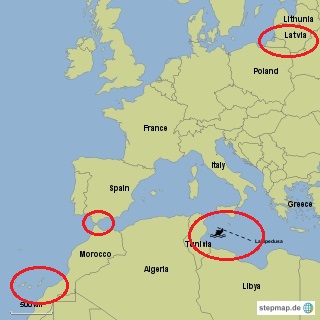 Areas to be surveiled by drones – © StepMap

First of all, it remains doubtful whether satellites and drones will really prevent further deaths at sea, as politicians claim. If this was the purpose, the EU would first have to revise current law which effectively makes it illegal for other ships at sea to help refugees. Fishermen who rescued boatpeople from drowning and brought them ashore in the EU have been accused of human trafficking.

The argument put forward by politicians here is that it would be impossible to distinguish between those who help people at risk and those who smuggle them. It’s the smugglers who are now the main target of criticism in the current debate. This is a diversionary tactic. While it is true that smugglers make money out of the desperation of refugees who are willing to take the risk of drowning at sea or asphyxiating in airless trucks, it’s the politicians who have created the mechanisms that make smuggling a profitable business. The fact that it is impossible for refugees to legally enter fortress Europe where they could apply for asylum drives these people into the arms of smugglers who will eventually find a reckless way to get them in.

It is also necessary to mention that the ‘protection’ of refugees, which has indeed been made a mandatory task of the EUROSUR project, should not be overrated. The EU’s understanding of the term ‘protection’ was demonstrated two years ago when the Italian coastguard and a military helicopter reached a boat which was crowded with 72 people. One would expect that the people were rescued. According to the definitions of the EU, though, their ship was not in distress at sea. In order to fit the category ‘distress at sea’ a boat would have to be disabled and adrift, or the engine or the navigation system would have to be broken. So instead of being rescued the refugees were given biscuits and some fresh water. Then the coastguard and the helicopter turned off. Two weeks later the refugee boat was detected close to the Libyan coastline. Only nine out of 72 people had survived.

Given the fact that European law promotes the denial of assistance for refugees at risk (or even murder by negligence), it is not surprising to see that when parliamentarians had their vote on EUROSUR they did not hesitate to withdraw a draft proposal which would have given priority to sea rescue over the fight against so called illegal immigration. Consequently, the implementation of EUROSUR will not bring with it any considerable increase in coastguard units who could patrol the Mediterranean Sea.

So who will the drones send for to rescue those at risk?

At this point, the crux with EUROSUR becomes apparent: As the system’s operating area includes non-European territorial waters, EUROSUR is yet another sneaky step towards completing the EU’s interception strategy (labeled political inclusion in the euphemistic EU jargon). For example, if drones detect a refugee boat off the Libyan coast, the EU will make sure that Libyan authorities are send for to take those people back to Libya before they can enter EU waters. Conditions for refugees in Libya might have improved recently and they are sure better than, for instance, in Somalia. Still, life in (post)-war Libya is anything but pleasant – especially when you are captured as a refugee and are locked away in a clink somewhere in the middle of the desert where torture is part of the police routine. It is therefore pretty disconcerting to hear politicians talk about Libya as “safe third country” where refugees are unhesitatingly deported to.

Finally, let’s take a look at the financial aspects. Needless to mention that the expenditure for EUROSUR must be expected to exceed those 244 million euros that it is currently estimated to cost between 2014 and 2020 alone. It should also be clear that this money is spend on top of the million Euros budget of Frontex, the EU’s private owned border agency. Against this background, it is a perverted twist to complain about the costs of asylum policies and refuge while at the same time tax payers’ money is spend on establishing a cruel border regime.