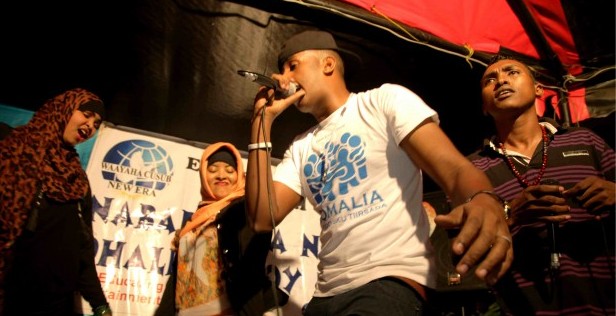 Founded in 2003, Waayaha Cusub (New Era) is a dynamic group of rap artists based in Nairobi and Mogadishu, with the various members torn apart by the war that’s waging in Somalia. Their groundbreaking album “Dadka yaa xasuqay?” (Who is killing the people?) not only brought the crew to local music channels but also sparked anger among Somalia’s warlords.

If al-Shabaab can succeed in using musical messages like ‘Nairobi tutafika’ (We will reach Nairobi) to sway the minds and get converts, I also believe that we can use music to hamper and stop the terrorists’ recruitment drive. Therefore, I am convinced that if we remain consistent and steady we can weaken their propaganda through music.”

Shiine Akhyaar knows just too well how dangerous life in exile is:

Al-Shabaab agents have been sending us numerous threats for the past four years. In November 2007, they went a step further by waylaying me at the entrance to my house in Eastleigh’s Eighth Street where they shot me several times with intent of killing me. But thank God I survived, although I spent six months in hospital.

Towards the end of last year, they severely mutilated the face of a female member of Waayaha Cusub so that she will not appear in our videos again. Since then, several members of the group have left but the rest of us, though scared, are determined to push on with our campaign against terrorism and piracy through music.”

Thir track “Burcad Badeed” (Piracy) features Abbas and tells a story of a young pirate’s fate which is far from romanticized images in literature but also offers the Somali perspective on the Gulf of Aden – a topic usually dominated by Eurocentric talk about securing goods traffic in the media.

Daily Nation (Kenya): Al-Shabaab bullets will not slow or stop this musician