Overfishing is a well known phenomenon we face all over the world. Whether salmon from the Atlantic, yellow fin tuna from the Indian Ocean or species from inland waters, overfishing of such species is an enormous challenge for many countries. The Kenyan government now banned any fishing activities in Lake Naivasha for three months.

The Ministry of Fisheries Development in Nairobi announced the ban lasting from 1st June until 31st August this year. Officials came up with such a close season in order to facilitate restocking in the lake. In 2001, the fisheries sector at Lake Naivasha almost died out because the ecosystem was affected by overfishing to a high extend. Not only increasing monitored fishing activities contribute their part to that worrying development but also the increase in poaching. According to fisheries officials, 20 people were arrested last year and almost 1000 fishing nets which targeted undersized fishes were confiscated. With such methods the young fish brood is often caught before they could even reproduce. 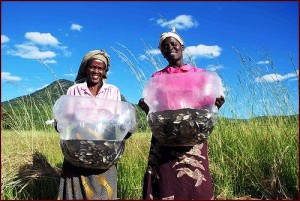 Governmental approaches are among others six new breeding zones in order to create areas in the lake which are free off any fishing activities. Besides that a restocking programme has been launched. In its course about 800.000 Tilapia fingerlings have been released into the lake. Legal consequences for poaching are also announced in order to stop a further increase.

Lake Naivasha is a fresh water lake North-West of Nairobi. It is situated in the East African Rift Valley and is an enormously species rich ecosystem. Particularly birds can be found in large numbers. Approximately 400 different species inhabit the lake area. 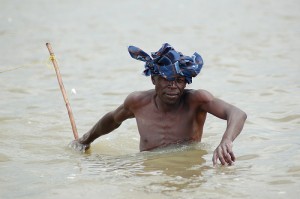 A fisherman putting his nets at Lake Naivasha. This is now prohibited for three months long, Copyright: Sara&Joachim

While the attempts of close seasons might be helpful for restocking and might counteract increasing overfishing in Lake Naivasha, it is questionable if local fishing communities can adhere to these rules or not. After all, the lake represents a main food source for a constantly growing population and is therefore of high importance in the region.

Stay up to date of the Kenyan Ministry of Fisheries Development: