For An End Game for Boko Haram, Spend Those Trillions on Education – Opinion

Friday 24th, May 2013 / 17:07 Written by Eufrika.org
As Albert Einsten once said “We cannot solve our problems with the same level of thinking that created them”. The challenge of terrorism and ostensibly faith and cult based intolerance, partly manifested in the Boko Haram insurgency, that we face in Nigeria was created at the level of ignorance. I have heard truly scholarly discussions and even in the last month at the CVL Faith and tolerance conference, the Chaplain of the University of Lagos House of Assembly spoke passionately about Islam as a religion of peace and one not opposed to Western education. That being the case the only solution is to fight ignorance with knowledge.

The top commanders of Boko Haram are not doing anything new. They do not believe that Boko or Book is Haram. If they really did would they be using Western weapons to fight? Would they be using Western media such as YouTube and other social media to communicate with journalists? Of course not. Malam Shekau was almost caught last year when he visited his wife in Kano and he escaped with the aid of a fast car, another fruit of Western Education. Thus it is safe to say that he and his top commanders are not against Western Education. Besides some of the leaders of the group are known to be University graduates. It would seem that they are revolutionaries in Boko Haram, whose goal is to overthrow the current establishment in Northern Nigeria just like their compatriots did in Somalia and their strategy in doing that is to take advantage of the massive illiteracy that is the bane of the Northern population.

This is no new strategy. Pol Pot and the Khmer Rouge did the same thing in Cambodia. They killed the educated and targeted centers of learning for the same reason that totalitarians have been doing for millennia-the educated are more likely to rebel against tyranny!

So rather than spend trillions on security, the Federal Government has to look beyond the immediate and have a long term strategy to starve organized terrorist groups of the oxygen that feeds their fire. We must begin to educate the masses of the North so that they value their lives. Education increases their level of consciousness and when a man has a heightened level of consciousness he is no longer easily susceptible to manipulation using primordial sentiments. Education also expands the scope of how they can earn income and get to a level of self fulfilment that cannot make them available for ideologues fighting different agenda. But it should not be in the North alone. Similar levels of low literacy in parts of the south are also sources of the state of insecurity in the South East and South South. This is why I have offered a liberal perspective on Paulo Friers’s Pedagogy of the oppressed. The pedagogy of the Determined, which I have proposed, takes a community based entrepreneurial approach to activist learning that can transform and empower in a short period of time.

Last year, the government used the same argument that previous administration used which is that the funds meant to subsidize fuel is not getting to its intended target which is the poor. So instead of subsidizing fuel, Nigeria has been subsidizing corruption.

Sound logic on the face of it. So now let us flip this. Rather than subsidizing fuel (or corruption) I am not too sure that the government will face too much resistance if it says that it will henceforth subsidize education. With half of the money that we are currently spending subsidizing fuel Nigeria can offer free and qualitative education up to secondary school level, using social enterprises, faith based agencies to complement and compete with direct government funding of educational institutions.

There is no easy fix to fighting terrorism

This is the type of long term strategy that will defeat the menace of terrorism as well as increase our Gross Domestic Product because an educated people produce more, have less children and are more healthy.

There is no easy fix to fighting terrorism. Ask the Middle East, ask Somalia, ask Afghanistan. To defeat terrorism, you must look much farther ahead than the terrorists. You must target the intending terrorist in a policy of catch them young. Rather than fighting terrorism with trillions of Naira spent on security we are feeding it by causing deep hatred in the hearts of the people of certain parts of Northern Nigeria for the military. Right now many of these people cannot decide who they hate most between Boko Haram and the Joint Military Task Force (JTF). Instead we must spend trillions on education and education will do what guns and bombs cannot do-make people value their life too much to be fodder for terrorism.

It is fitting to conclude with a word on values over faith. Years ago a much respected moslem friend told me a true story of a great moslem cleric who visited the United States. Struck by the values of the people he met, he lamented the paradox of leaving a moslem country where the people do not behave like moslems and coming to this non-moslem country where they behave like moslems. What has gone awry in Nigeria is not a faith dispute but a crisis of values. And the insurgency can be curbed with education laced with the right values.

This article was first published on www.saharareporters.com. 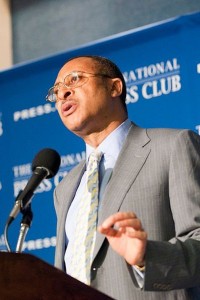 Patrick Okedinachi Utomi is one of Nigeria’s most prominent professors of political economy and management expert, a Fellow of the Institute of Management Consultants of Nigeria and a former presidential candidate.

All views expressed in this article are those of the author and do not necessarily represent the views of, and should not be attributed to, eufrika.org
Diesen Artikel empfehlen bei: