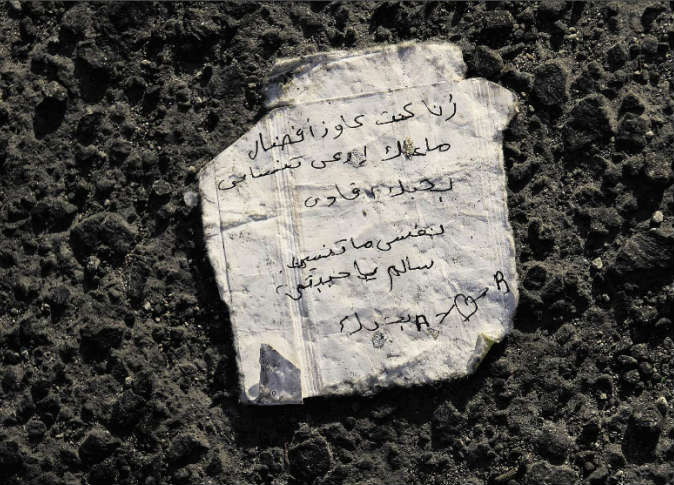 This article was originally written in Arabic by Omar Elhady and published in Al-Masry Al-Youm Newspaper on September 19, 2014. It was also nominated for the Mostafa Alhosseiny Prize for the best article by a junior Arabic journalist. Translated by Ibrahim Bassem

On a torn up pack of cigarettes near the Italian shore, cupid’s arrow is drawn connecting between the hearts of “A” and “R”, along with a small message in Arabic full of spelling mistakes: “I wanted to be with you .. Don’t forget me .. I love you so much .. I hope you don’t forget me .. Goodbye my dear”.

This is what a young Egyptian man left, when he decided that death while searching for a new life would be better than staying in a country that is unjust to its people.

We don’t know what happened to “A”, but we do know that he wrote this message as he waited for the prospect of death. A message he wrote with full consciousness that these may be his last words. He chose to write it to his lover, as if telling “R” he is doing this for her; and all that he asks from her, now that the end has come, is: To know that he loves her, not to forget him, and to remember him as a final testimony for a human’s dream of life on the wrong part of the world.

We don’t know how “R” is either; did she hear news that “A” drowned? Did he call her to assure her he survived? Did she never hear from him again and he became part of the ‘missing’? Did her parents even know their story? How did she explain to her mother why she has been crying the last few days? And how did she respond to all the hints she’s been lately getting from the family’s ladies about marrying her cousin?

In Egypt, no one cares about the story of “A”. Egyptian newspapers usually only publish short passing headlines about this topic, such as “Tens of immigrants drown in the Mediterranean Sea, which included some Egyptians”. If the numbers were a bit higher and maybe many of those in the accident were from the same town or village, then some newspapers may find the story interesting enough to send a reporter and photographer that would interview the families of the victims. In the end, an article may appear that would probably have a title such as “Story of the death journey” or “Survivors share the moments of fear”.

This time, the story reached us by coincidence when photographer Lynsey Addario spent a few days on the on the coast of Sicily searching for the stories of migrants and found “A’s” message. She then ran it by an Arabic translator, before sending it to the editorial board of The New York Times, who decided that the tragedy of a young Egyptian man deserved to be on the first page of their international edition.

If you think it was “A’s” bad fortune that had prevented him from entering ‘the labor market’ and ‘starting a family’ with “R”, his message is reminiscent of another young Egyptian that had a situation contrary to this. In fact, this young Egyptian had excelled after graduating from the faculty of Economics and Political Science. However this young man also wrote a letter to his sister-in-law before jumping in the river Nile to end his life: “Send my greetings to my mother and father, and tell my brother Sayed to take care of our younger brother Reda and support him till he finishes his education. Take care of each other.”

This was Abdelhamid Shatta. He had excelled in the exams for diplomatic trade attaches, but was then excluded from the job appointment days before his master’s thesis defense on “the role of the constitutional court in political reform”. The reason behind his exclusion was “social inadequacy”. He was eliminated because his father was a worker in a brick factory, and thus from a lower social class.

If you think that the Egyptian state has changed and is now putting all its effort in alleviating poverty and enforcing social justice, despite the tough conditions, then look at the appointments done by the Egyptian judiciary system in December 2013 where you will find that judges got their offspring a quarter of all appointments, even though they only represent 0.0014% of the population. A judge, who was part of the higher council of the judiciary, said it clearly days before the appointments were announced: “The sons of garbage collectors won’t be accepted in the judiciary”. So if this is the condition of the institution enforcing justice in the country, then you can imagine what the rest is like.

Hosni Mubarak’s regime is responsible for the death of Abdelhamid Shatta. And Abdelfattah Elsisi’s regime is responsible for the death of every other Abdelhamid, if they don’t stop with the rhetoric of political ‘sweet talk’ and start taking real measures that end discrimination against citizens, as well as enforce a redistribution of wealth that allows the people of this nation an equal opportunity for a good life.

If these requests are difficult ones which require complex economic plans and legislative reform over many years, then the Egyptian state can start with a small humane act that won’t cost it much, like ending the torture and rape faced by the poor in the country’s police stations.