Nigeria and Benin have taken up a joint patrol mission in the Gulf of Guinea. The aim of the armed ship fleet is the effective fight against piracy, which is developing to a serious risk to crews and cargo traffic off the coast of West Africa. Some observers estimate the threat to the economic development of the region equal to the situation in Somalia. The current attacks mainly express a lack of control, which also causes an increase in drug smuggling and illegal fishing in the region.

Particularly affected is the trade corridor between Ivorian Abidjan and Lomé (Togo). Already in the first half of this year there are reports of at least 18 attacks within the territorial waters of Nigeria and Benin. The main problem is the low level of troops of national marine units and their obsolete equipment. But also the diplomatic negotiations between the regional heavyweights so far went anything but determined.

After non-binding talks by representatives of West African economic community ECOWAS (Economic Community of West African States) Nigerian President Goodluck Jonathan and his counterpart from Benin, Thomas Boni Yani, now have agreed in launching a joint naval mission in the Gulf of Guinea. Nigeria has the lion’s share in the mission, regarding both financial and human resources.

Armed patrol boats – mostly discarded models of the U.S. coast guard – will in future operate on the high seas to intervene quickly in case of a reported robbery. For years several European countries have been negotiating on a material and financial support as well as education and training programs for the naval units of selected African countries. The MCA (Maritime Co-operation with Africa) also aims to improve the cooperation of regional naval organizations.

Recently also China offered the government of Benin some ​​$34 million in prospect. The funds will be used primarily to combat piracy and facilitate the modernization of Benin Navy with its just 700 units.

The countries of the Gulf of Guinea, daily pumping more than three million barrels of crude oil and having large proven reserves already make up at least four percent of global output. OPEC-member Nigeria has about 2.2 million barrels for the lion’s share, but also Ghana’s recent entry into oil industry promises to continue increasing frequencies on the main transport routes off the coasts of West Africa.

The economic recovery in Ivory Coast as well as rising exports of metals, cocoa and coffee from Benin and other economically emerging countries give experts little doubt about intensified activities of the pirates in the region. The latest example is an attack on a container ship off the coast of Guinea .

The economic stability now is seriously at danger due to increasing activities of the pirates, warn security experts . Some observers expect the economies of the region to suffer an annual loss of up to two billion U.S. dollars. First reluctant entrepreneurs already consider a withdrawal of their trading activities in the Gulf of Guinea, which could mean fewer ships calling at ports in the economic centers, economists fear. Such isolation could lead to rising costs for raw materials and living in the countries concerned and would therefore also have far-reaching consequences for residents of the region.

After the International Maritime Organization (IMO) for the period from 2009 (46) and 2010 (47) had reported a steady, relatively low number of robberies in West Africa, the Association confirmed a dramatic increase in such incidences in the region for 2011. Other sources suggest that the true figure is considerably higher than has been officially expected. Finally the lack of statistical data makes meaningful comparison between regions difficult. While the international community now takes the situation in Somalia seriously after a long delay, piracy in the Gulf of Guinea is still regarded a marginal phenomenon. The number of recorded robberies in Nigeria illustrates that this is truly not the case: the Nigerian coast guard this year noted an average of 10-15 per month. 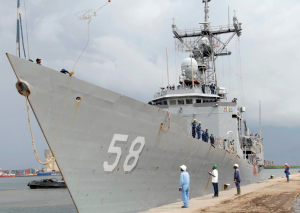 Unlike off the coast of Somalia, the pirates in the Gulf of Guinea have less specialized in hostage-taking of the ships’ crews: the cargo is what interests them most as they can expect high profits from sale.

Piracy in the hardly controlled area of the open seas off the coasts of West Africa is increasingly blended with other illegal activities. In connection with oil production in the Niger Delta there is a further parallel to the current piracy in the Gulf of Guinea: the resistance against multinational corporations and their often opaque machinations.

So the piracy in the coastal waters of West Africa, as in Somalia is closely connected with the struggle of the local population against the exploitation of the seas. Quite a few of the fast-acting pirates are former members of various rebel groups in the Niger Delta. Inhabitants of the oil-rich region committed several acts of sabotage in recent years, obstructing the work of the oil industry , which they accuse of corruption, exploitation and gross human rights violations. In 2008 attacks on drilling projects of both international and national companies by militant groups led to a dramatic decline in oil production in the region.

Furthermore, experts have been observing for several years a significant increase in drug smuggling in the region. Primarily cocaine from South America is being transported to Europe via West Africa more and more frequently.