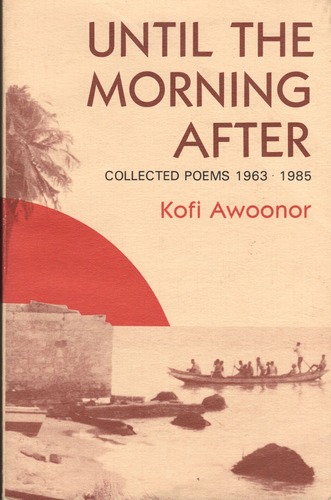 Kofi Awoonor, the great poet, diplomat and academic, was killed in the Westgate Mall attacks in Nairobi on Saturday, September 21. The professor was one of the many distinguished guests at the Storymoja Hay festival’s celebration of writing and storytelling. He was not only invited to participate in public events and readings but also to teach a master class of emerging poets. The festival was aborted on Saturday evening in response to the terrifying events which cost the lifes of over 60 innocent people and left several hundreds injured.

In 2005 I bought a poetry collection by John Aidoo at a University book shop in Accra in a rush without much consideration . Catching my breath in the bus I opened the newly purchased treasure just randomly somewhere in the middle and there I ‘met’ Awoonor for the first time – in a quote from We Have Found a New Land:

Kofi Awonoor, born in Ghana in 1935, studied in Accra, London and New York. He held posts at universities in the United States and in Ghana. His first poetry collection Rediscoveries and Other Poems was published in 1964. After returning to Ghana in 1975 he was imprisoned by the military government as a political detainee. From 1985-89 Awoonor served as Ghana’s ambassador in Brazil and the following four years in Cuba. In 1990 he was appointed as the country’s permanent representative at the United Nations, heading the committee against apartheid.

Awoonor’s body of work comprises poetry collections, stories, plays and two novels as well as non-fiction writing. A contemporary of Christopher Okigbo, J.P. Clark, Chinua Achebe and Ngũgĩ wa Thiong’o, he was among the attendees of the groundbreaking African Writers Conference at Makerere University in 1962 who attempted to describe what African literature is and will be. Discussions on form and language shaped the writing in these early days of independence on the African continent. Similar to the “Igbonized” English of Achebe, Awoonor’s verse, mostly written in English, was highly influenced by Ewe culture, tonality and lyrical tradition, especially of dirges. Recurring themes in his versatile and often autobiographical tinged writing are colonialism and Christianity, death, absence, personal discovery and homecoming – the experience of exile. Awoonor’s extended use of rhythm and repetition weaves patterns of recognition and indeed rediscoveries.

As the Storymoja Hay Festival stated in its tribute to the late poet: “Professor Awoonor was one of Africa’s greatest voices and poets and will forever remain a beacon of knowledge and strength and hope”. And in fact, after more than 25 years of anticipation we can now look forward to the publication of his new poetry collection Promise of Hope: New and Selected Poems which is announced for 2014 as the lead book of the new African Poetry Book Series.

Subsequent to the afore mentioned quote by Awoonor, John Aidoo introduces the next section in his collection with the following lines from Wole Soyinka’s notes from prison, The Man Died:

“The man dies in all who keep silent in the face of tyranny.
In any people that submit willingly to the daily humiliation of fear,
the man dies.”

View all articles by Anna Jäger