Juridical process of coming to terms with the genocide in Rwanda 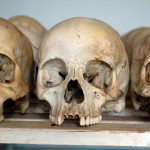 Like these skulls in Naryabuye, reminders of the 1994 genocide are still to be found all over Rwanda - Copyright: Genvessel

Seventeen years ago, after the Rwandan president Juvénal Habyarimana died in a crash of his airplane, Rwanda was haunted by mass killings of an estimated 800.000 people. Now the UN-backed tribunal for war crimes, International Criminal Tribunal for Rwanda (ICTR), sentenced former major Gregory Ndahimana to 15 years in prison. Verdict of guilty: Genocide and crimes against humanity.

In 1994, extreme Hutu militias killed about 800.000 people, mainly Tutsis and moderate Hutus within 100 days. Those mass killings shocked the world community and in the following the ICTR was institutionalized in Tanzania’s Northern town of Arusha. Its task is to locate and to convict the responsible protagonists from the past genocide.

One of the focuses of the ICTR’s work is the district of the now sentenced Gregory Ndahimana. He was arrested in theDemocratic Republic of Congo (DRC) on 26th August 2009. In Nyange in Rwanda’s Kivumu district, he was accused of being involved in the killing of more than 2000 Tutsi refugees. They found shelter in a catholic church in Nyange to escape the ongoing brutality throughout the country. Hutu extremists bulldozed the church in the course of which most of the around 2000 refugees died.  Prosecutors accused Ndahimana of having specifically planned and ordered the massacres in his district. While the accused pleaded not guilty to all charges, the court sentenced him to 15 years in prison, guilty of genocide and crimes against humanity. According to the chamber of the court, Ndahimana is guilty of not having taken steps against the local police forces and not intervening. According to Al Jazeera, the court’s statement says:

The chamber … found Ndahimana guilty of genocide and extermination by aiding and abetting as well as by virtue of his command responsibility over communal police in Kivumu [district].

The presence of the accused at the scene of the crime had an encouraging effect [on the attack].”

Gregory Ndahimana is the third convicted person by the court for the past killings in Nyange. The sentence of 15 years in prison for a former high rank politician more than 15 years after the genocide shows that the juridical process of coming to terms with the past is still not finished. On the contrary, the process will probably still go on and the work of the ICTR will not stand still.