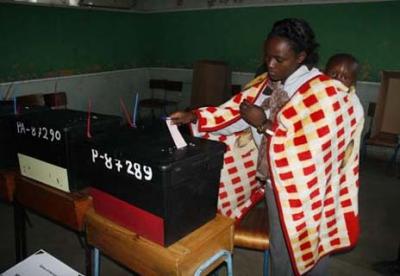 A woman casts her vote with her child at Kenya’s 2007 elections. © DEMOSH

Consternation for women’s rights advocates in Kenya as a Supreme Court ruling disregards the new gender parity law ahead of March 2013 elections. By Seema Shah On December 11 – the eve of Kenya’s 49th anniversary of independence – the Supreme Court handed down a controversial ruling regarding the fate of the new gender parity law. Instead of pushing lawmakers to immediately enact the new law, the court deemed that its implementation across all elected bodies would be unfeasible before the upcoming elections in March 2013. Rather, the change would need to be enacted “progressively” over time.

Many believe this is a regression on the path to democratisation, seemingly at odds with Kenya’s enlightened new constitution in which gender parity is firmly enshrined.

The 2010 Kenyan constitution has been lauded as one of the most progressive in the world for its inclusive and comprehensive bill of rights, decentralisation of power, reserved legislative seats for youth and the disabled, and several new, independent commissions. It also includes important provisions related to gender equality. In addition to granting women equal inheritance rights and making laws related to marriage and custody of children more equitable, it prohibits elected bodies from being overly dominated by one gender.

In fact, the constitution prohibits either gender from constituting more than two-thirds of any elected body; this means women, who are currently severely underrepresented in Kenya’s political arena, must make up at least one-third of all elective public bodies. The Political Parties Act of 2011 extends the two-thirds rule to parties’ membership lists and governing bodies.

If enforced, these laws have the potential to finally make women’s voices heard in the private and public realms. And this will have important ramifications not just for women but society as a whole. When women hold office, they tend to advocate more strongly not just for women’s rights but also for children’s rights – a phenomenon known as the ‘double dividend’. Women in office are also more likely to advance the rights of minorities, promote family-friendly legislation, and work on issues related to education, health and nutrition. In Kenya, where the child mortality rate is 73 out of 1,000 and where less than half of school-aged girls get a secondary school education, more legislators working on these issues could prompt important changes.

Increased women’s participation has also been shown to sometimes result in tangible gains for democratisation. This includes greater responsiveness to citizens’ needs, increased inter-party and inter-ethnic cooperation, and more sustainable peace. Research suggests that peace agreements and post-conflict reconstruction have a better chance of succeeding in the long run when women are involved. With Kenya still healing from the trauma of the 2007/2008 post-election violence, long-term commitment to peace and social reconstruction is especially critical.

Despite these potential benefits, Kenyan politicians have struggled to find a way to realise the required gender ratio. Furthermore, there are significant cultural and technical barriers to the implementation of the rule. In many Kenyan communities, for instance, the act of voting is a family affair. Women are chaperoned to the polling booth by their male relatives or husbands, placing constraints on their right to vote freely. Husbands are also the custodians of their wives’ national identity cards, a requirement for voting. The cards are usually only handed over on election day as the women are escorted to the polls.

Social norms in many Kenyan communities also place women in the home, while men work in the community and act in the political realm. These social roles are difficult to change, especially as it is not only men who support them. Illiteracy also remains an issue, with many women struggling to independently understand their voting options.

Obviously voters cannot be forced to elect women, so how can the gender ratio be ensured? One of several ideas that gained the most ground over the last few months was a constitutional amendment requiring political parties to generate a list of nominated women. If elections did not produce enough elected women, the amendment allowed political parties, in proportion to the number of Senate seats won, to appoint women from the list in order to achieve the gender balance.

But this amendment risked creating a dangerously bloated legislature – depending on how many extra women would have been needed to meet the requirement. Ultimately, however, the amendment did not pass, sending Kenya towards a constitutional crisis. Without a provision to ensure the required gender ratio, elections could easily produce insufficient numbers of women. In that unsettling scenario, the elected parliament would have to be considered constitutionally illegitimate and be unable to convene.

Which brings us to the latest ruling from the judiciary. To evade constitutional crisis, Attorney General Githu Muigai took the matter to the Supreme Court. In its ruling last week, the court declared that the gender parity rule could not be implemented in the upcoming election. Instead, gender parity is to be achieved “progressively”. The court did, however, stipulate that the rule must be fully implemented by August 2015. Notably, Chief Justice Willy Mutunga dissented, stating that the ruling “flew in the face of the struggle by Kenyan women for gender equality”.

Indeed, the ruling was a blow to many who had hoped that the new parliament would be more broadly representative of the country. Instead, the ruling maintains the status quo, which leaves Kenya shamefully trailing behind many of its East African neighbours. Currently only 9.8% of Kenyan parliamentarians are female, compared to Rwanda’s 56.3%, Tanzania’s 36% and Uganda’s 35%.

Prior to the ruling, a number of possible solutions had been suggested from Kenyan civil society and further afield. One proposal was to use rotating constituencies, whereby certain constituencies would be reserved for women in elections; the constituencies to be reserved would change with each election. Another option was ‘twinning’, whereby in certain larger constituencies voters would elect a man and a woman to parliament.

Other possible solutions were taken from the examples of Kenya’s neighbours. In 2008, Rwanda became the leading country in terms of gender parity, with 56% of its legislature occupied by women. Its specific historical circumstances and the government’s political will had much to do with this success, but it is useful to examine the country’s methods of implementation.

Firstly, legislators who filled the 24 reserved seats for women in the Rwandan lower house, known as the Chamber of Deputies, won their seats via women-only elections. In these elections, only women contested seats and only women voted.

Secondly, women’s councils (grassroots structures elected by women only) have played an important role. These councils represent women’s concerns, carry out skills training at the local level, and engage in the advocacy of women’s rights. The head of the women’s council holds a reserved seat on the general local council, which ensures representation of women’s concerns and provides a link between the two structures. Such mechanisms educate women about their rights, validate their concerns, help train them to work in the public sphere, and help promote their inclusion in government decision-making. Some version of any of these options may work in Kenya and should be considered for the future.

Fairer politics for the fairer sex?

At a constitutional level, it is perhaps important to note that increasing women’s representation in Kenya would stand a much higher chance of success if Kenya were to adopt some form of proportional representation (PR). One study has shown that women are almost twice as likely to be elected under PR systems as they are under majoritarian systems.

Based on the principle that any group of like-minded voters should win legislative seats in proportion to its share of the popular vote, PR facilitates the inclusion of not only women but minorities and other marginalised groups. In Kenya, where inter-ethnic electoral violence has been an issue since the introduction of multi-party democracy in 1992, PR would include more women and also help mitigate ethnic fractionalisation.

Of course, PR is not perfect. It is known to cause situations in which smaller, extremist parties can hold a disproportionate degree of legislative influence, and it can cause legislative deadlock. Given Kenya’s experience with ethnic polarisation and inter-ethnic violence, however, it is surprising that Kenya’s monumental constitutional reform, which included significant changes to the election laws, did not make more headway in terms of creating a more inclusive electoral system.

At least until March, the women of Kenya appear to have few options but to settle for the status quo. Hopefully, civil society momentum will continue to help female candidates in their endeavours through the elections and beyond. Then the work to implement the gender parity law can start afresh.

This article was first published in ThinkAfricaPress.

Seema Shah earned her PhD in Political Science from UCLA. She currently works as a Researcher with Africa Centre for Open Governance (AfriCOG) in Kenya, with a focus on elections and ethnic violence.