Episode II: The Rwandan Revolution (Hutu rebellion in Rwanda in 1959) 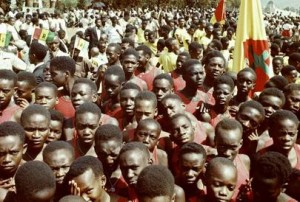 Independence celebrations in the Republic of Rwanda in 1962 marked a year of large refugee masses fleeing to the Kivus in neighboring Zaire, Copyright: UN Photo by BZ

The extensive resettlement program under Belgian colonial rule from Ruanda-Urundi to Congo’s Kivus has been discussed in the first episode of eufrika’s new Kivu-Series. Already in the beginning of the Twentieth Century, the social composition of the Kivus’ population was highly influenced by influxes of people from different areas.

This second episode will concentrate on another phase around the period of Rwanda’s independence when the region experienced a Rwandan Revolution.

After German colonizers first misused the social distinction between Hutu and Tutsi which was originally based on occupation, Belgian rulers intensified that. As already mentioned in episode I, they favored the Tutsi population to a high extend and with that exacerbated social tensions in Ruanda-Urundi.

In the aftermath of the sudden death of Rwanda’s then president Mwami Charles Mutura Rudahigwa, the Tutsi Council of Ritual Chiefs put a new leader into office. This resulted in the mobilization of many Bahutu and in 1959 masses revolted against the new Tutsi government. They feared that the new administration which was supported by the Belgian colonialists to a high extend would take devastating actions against them. During the following three years the Bahutu attacked the Tutsi minority and looted, even destroyed a lot of their properties and cattle. The results of these violent clashes were thousands of dead Rwandans and a large number of refugees to the Kivu regions in neighbouring Zaire.

Gregoire Kayibanda, first president of Rwanda (2nd from left) meant a shift in the ruling of Rwanda from Tutsi to Hutu supremacy, Copyright: UN Photo by Teddy Chen

In January 1961, the Belgian government’s shift from favoring Tutsi to the later support of the Bahutu population was of high importance. A coup d’état which was supported by the Belgian administration, actually proclaimed what was a Hutu-republic. In fact, this overthrew the former system of power and changed the ruling group of population. The shift of power positions lead into the displacement of around 120.000 Tutsi into neighboring countries. 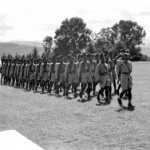 UNOC troops around Bukavu in 1961 whose presence was rather focused on the conflict in Katanga than in the Kivus. © UN Photo/ KG

In the year of Rwanda’s independence, already 60.000 Rwandan refugees could be found in North and South Kivu. These were mainly concentrated around Goma, Bukavu, Nyangezi and Luvungi. Since secession movements in the southern Congolese Katanga region caused a lot of trouble and attracted the international community’s main attention, an ordered repatriation of the Rwandan refugees from the Kivus was not of main interest at that time. After the resettlement of Kinyarwanda-speakers to the Kivus in the aftermath of World War I, the new refugee masses had to position themselves in the regions’ social struggle.

The refugees cannot remain neutral. They have to take sides. If they do not take sides they attract upon themselves the enmity of the chiefs and populations where they are. If they do take sides, they are accused of meddling in politics by their adversaries. They stand to lose in either case. (Cited by R. Lemarchand, Rwanda and Burundi, Pall Mall Press, London, 1970, p. 215.)

Consequently, one can recognize that the refugees brought an additional explosive factor to the Kivus which were already shaken by high social tensions between Kinyarwanda speakers and local groups of population. This illustrates again how important it is to take the historic violent clashes and social tensions into account when it comes to conflicts among the population of the Kivus nowadays.

In the upcoming third episode, the third phase of the genocide in Rwanda and its impact on the neighboring Kivus’ population will be focused on.