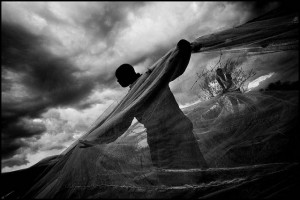 Lake Victoria, located in the East African Rift Valley, is one of the oldest lakes in the world and besides that world’s second largest fresh water lake. During the last decades, the lake was one of the most productive lakes worldwide, contributing $300 million in annual fish exports to the economies of Kenya, Tanzania and Uganda. Nowadays, increasing water pollutions and illegal, unregulated and unreported fisheries endanger the once diverse and rich fish stocks.

In former times, Lake Victoria was seen as the paradise within the East African Rift Valley. An enormous diversity of fish species made it one of the lakes with the highest biodiversity in the world, offering large fish stocks. Perchs of the Cichlidae family are the most demanded ornamental fish in the world. The lake once inhabited more than 270 different species.

But today, the devastating introduction of the so-called Nile perch is on everyone’s lips. Since this fresh water fish was introduced in the waters of Lake Victoria in the 1950s, governments as well as eco- and economic experts have dealt with the phenomenon of the near-extinction of dozens of local species.

While the Nile perch causes a lot of damage in the lake’s ecosystem, it also contributed its part to the increasing productivity of the lake. Most of today’s industrial as well as artisanal catches are reported to be Nile perch. All over the globe, the demand for the tasty food fish increases and the income for the bordering countries’ economies is estimated with some several hundred million US$ per year. The fishing industry in Lake Victoria is not imaginable without that species anymore.

But even the fish stocks of the main food fishes are now endangered. Increasing water pollution, the use of illegal fishing gears, unreported catches and general overfishing are contributing their part to the decrease of the fish stocks in Lake Victoria.

Enormous population growths in all the three riparian parties increase the pressure on the natural resources of the lake. Currently it is estimated that a population of 30 million people lives in the Lake Victoria Basin. At current estimates, this population will double within the next 15 years.

According to a study carried out by the Lake Victoria Environmental Management Programme (LVEMP), Nile perch stocks dropped from 750.000 tonnes in 2005 to 337.000 tonnes in 2007. Tilapia, another important food fish, is reported having dropped from 27.000 to 24.000 tonnes in the same period of time. These changes are alarming not only for the economies of Kenya, Tanzania, Uganda and its local fishing communities but also for the whole ecosystem of Lake Victoria.

Particularly illegal fishing methods threaten the fish species to a high extend. It is reported that such methods even include poison fishing, which damages the ecosystem even more. The concerned governments now realized the increasing destruction of the natural resources in Lake Victoria and take steps against this development. Fisheries officials from the three countries are currently working on a plan to tackle the problems and to ensure a sustainable utilization of the resources. For that purpose, a new initiative of the EU’s Indian Ocean Commission (IOC), Smart Fish, works on the monitoring, control and surveillance of fishing activities in Lake Victoria. 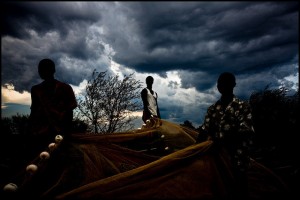 Plans of action include among others law enforcement on fisheries in the territorial waters. With that the governments aim at so-called Beach Management Units (BMUs) for instance. Competences regarding these Units are often not clear which is why an appropriate surveillance and monitoring is often not possible.
According to The Citizen, a senior fisheries official from Tanzania, Rodrick Mahimbali, states:

The laws are not strong enough. Take the case of Beach Management Units (BMUs – organisations of fishing communities formed at every gazzetted fish landing site). They are supposed to be the foundation of co-management in MCS but in Tanzania, it’s still not very clear who between the central government and the Local authorities has control over them.”

Key expert of Smart Fish, Marcel Kroese, said during a meeting of the Ministries of Fisheries in Jinja:

The East African states of Kenya, Uganda and Tanzania share a common responsibility in the management of the lake fisheries because it is a shared resource and any action taken at any one part may trigger an effect that affects the entire lakes fisheries.

The success of this initiative will require a system of data sharing on a regional level, the enhancement of human resources in the region to a dedicated, fully-trained professional fisheries inspectorate. We would also like to oversee the development of a national and regional response to Illegal, unreported and unregulated (IUU) fishing through joint patrols.”

Such patrols have already proved successful. Ugandan police forces seized about two tonnes of immature fish and 325 illegal fishing gears off the shore of Lake Victoria. This patrol was a joint effort of the East African states and lead to the destruction of the seized fishing gear.

The fisheries principal officer in the ministry of fisheries in Uganda, Daisy Oryel commented on this first mission:

The fishermen use undersized nets which grab young fish. It is now hard to get a reasonably sized fish from this lake. That is why fish prices are so high. So these operations are aimed at giving some rest to the lake to recover.”

Since this was the first joint mission of officials from Kenya, Tanzania and Uganda, it remains to be seen how effective the cooperation between the three states will be in future. But in any case, the joint plans of action are a success for a future sustainable utilization of Lake Victoria’s resources. The hope only remains that it is not too late for the species rich ecosystem of the world’s second largest fresh water lake.