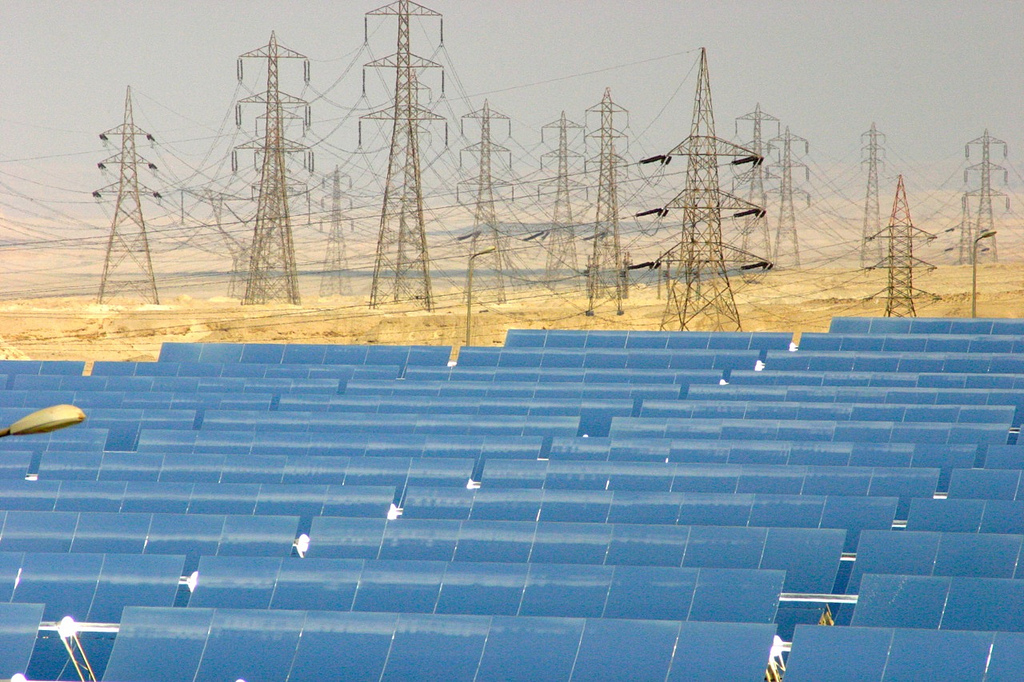 Moroccan energy expert Dr. El Mostafa Jamea questions the benefits of the large-scale project Desertec for the local communities. He emphasizes their concerns and critics as well as possible alternatives in the sector of renewable energies in North Africa.

RENEWABLE ENERGY IN NORTH AFRICA
North Africa is endowed with abundant renewable energy resources, which can supply the whole, current and future, electricity demand in the region. These resources can also be exploited in generating clean electricity and exporting it to the European Union (EU). The exploitation of renewable energies resources in North Africa should lead to job creation, income diversification and socio-economic development; it is an opportunity to create hopes and prosperity for the future generations and more stability in the region.

On the northern side of the Mediterranean, Desertec foundation developed the Desertec initiative which is a plan consisting on the exploitation of the abundant renewable energy resources in the desert of the Middle East and North Africa region. The long term objective of the Desertec initiative is to meet the whole electricity demand in the MENA region and to supply 15% of the electricity demand in Europe by 2050. The initiative is considering transporting the generated electricity using high voltage direct current (HVDC) in order to minimize the transmission losses. It is estimated that in order to achieve this ambitious plan, a total investment of more than 400 Billion Euros will be mobilized. The Desertec plan is so huge and will have considerable impacts on the environment and local communities in the region.

The Key facts of Desertec initiative are: it is a large industrial project; it requires thousands of hectares; it requires huge amounts of water for its function; it will use thousands of tons of solid materials; it is an intensive capital investment; it is a multilateral partnership; it will produce clean energy; and, it will use HVDC power transmission lines. Another aspect of the Desertec initiative is its focus on concentrating solar power (CSP) technology. This technology is still not competitive in the market compared to other renewable energy technologies such as wind energy and PV, and creates fewer jobs compared to other renewable energy technologies.
In such big projects, it is opportune and worth to study the potential environmental and socio-economic impacts on local environment and communities. It is very important to assess objectively, precisely, carefully and concisely these impacts and to reflect on the elegant solutions in order to mitigate the negative ones and to think about maximizing benefits for the local communities.

On the other hand, the planning of Desertec initiative involved few development actors from the South of the Mediterranean, most of them representing public institution and central authorities, and practically no representative of the local communities; whereas, local communities, via their representatives and leaders, are essential actors in the successful development and implementation of any project in the region. Dialoguing with local communities demonstrates that these communities are seeing with doubting eyes the project: The project will use land, which they are using; it will use fresh water, which is already not sufficient for their consumption and very scarce in the region; it will impact the surrounding fragile ecosystems, even it is stated that the North Africa desert is considered a true desert where practically the soil is inert.

Local communities from the south of the Mediterranean are asking and arising the following questions and observations:

ALTERNATIVES TO DEVELOP RENEWABLE ENERGY IN THE NORTH AFRICA REGION
As stated above, renewable energy is an opportunity for North Africa to diversify its economy, create jobs, income and clean energy to be used as motor for other economic activities such as sustainable agriculture, sustainable tourism, low carbon industries and services… etc. It should be a motor to achieve economic shift and development responses with regard to the development claims raised during the Arab Spring. 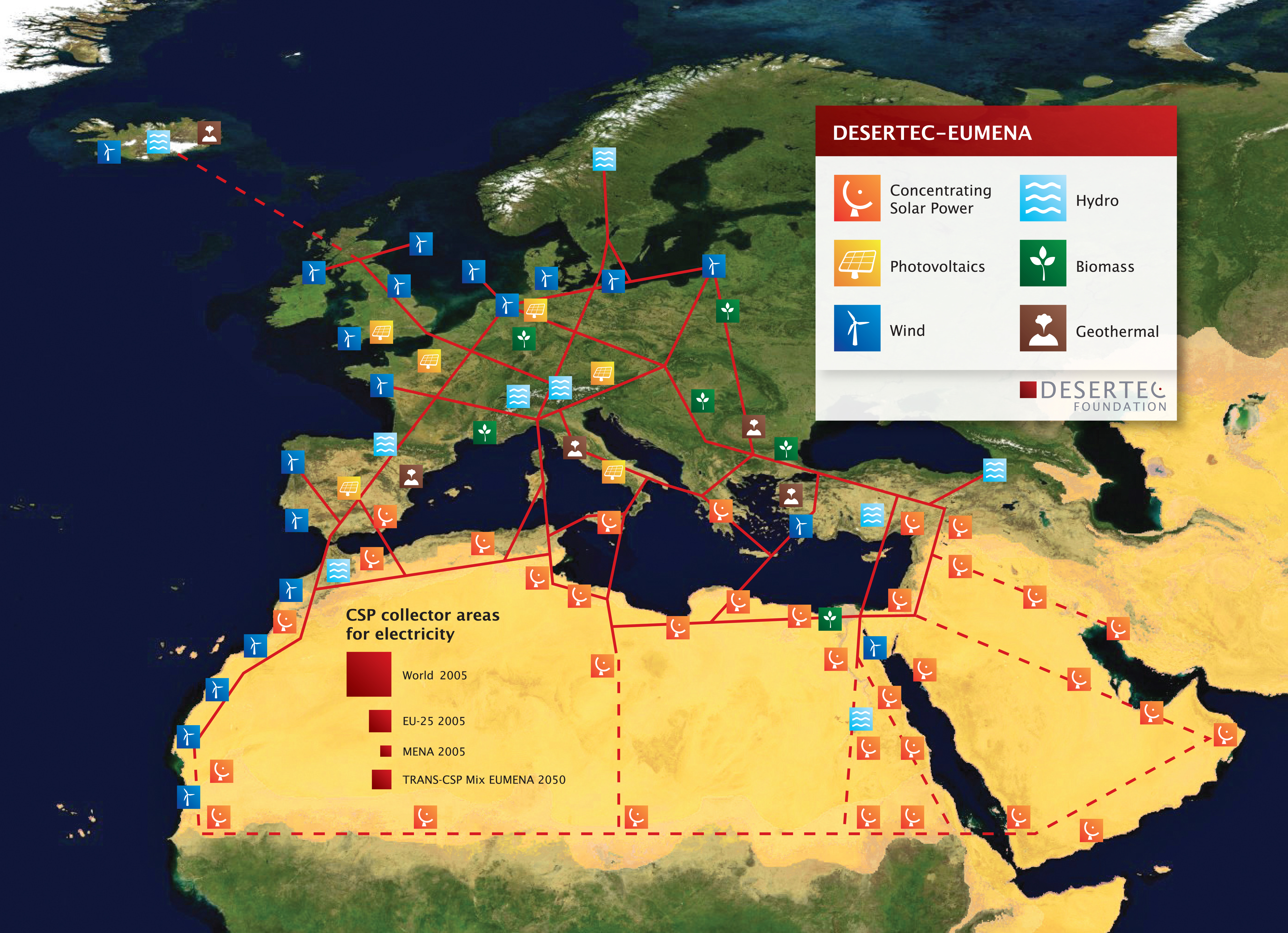 Photovoltaic
PV industry has showed spectacular progress in terms of the technology performance and costs. It is a mature technology and cost competitive with the conventional energy. On the other hand, small and medium scale PV projects will boost job creation, economic development and can be a mean to build the necessary skills and expertise on renewable energy in North Africa. The advantages of the PV are:

The investment in PV projects will secure energy supply, reduce transmissions losses, reduce the greenhouse gas (GHS) emissions, and improve the technological progress of North Africa. It will also create the conditions for European SMEs to invest and partner with local SMEs in investment on: components manufacturing, project planning, development, implementation, and Maintenance and operations.

Wind energy
The Atlantic coast of the North African region has huge wind energy resources. These resources can be exploited using the wind energy technology, which is already cost competitive, mature and very reliable and has low financial and socio-economic risks. The investment in such technology in North Africa will be more opportune in exploiting renewable energy and testing its export from North Africa to Europe. Since this technology will not need huge water quantities required for the daily operations of the CSP plants, and enable the multiple use of land, it will also maximize the benefits of any joint venture investments between European and North African countries.

Wind energy provides a low cost energy choice and is a variable power source. It is the  less expensive part of the energy mix compared to solar, and storage has not really been an issue so far. On the other hand, across the North African region, considerable wind resources exist and can be exploited in generating clean electricity for local consumption. Egypt, Morocco and Tunisia are the most endowed with abundant wind energy resources. These countries can boost the private investment by creating adequate legal and administrative framework for investment, production and electricity distribution.

Energy Efficiency
The most important source of renewable energy worldwide is the energy that we do not consume; we just waste. By saving energy and improving the efficiency of our energy use, we will be able to reduce the GHG emissions, save capital that we can invest in reliable renewable energy technologies. In the Euro-Mediterranean area, the potential in energy efficiency is enormous. There are many plans consisting in improving resources efficiency and energy efficiency across this area. Exchange of expertise and knowledge, as well as Euro-Mediterranean cooperation in this topic, is highly required to generalize benefits.

In the meantime, North African countries should adopt strong measures to achieve higher energy efficiency. Approaches that will offer practical solutions to meet the energy needs without sacrificing socio-economic development priorities. Public authorities should as well develop energy efficiency as a mean to create jobs in engineering, consulting and technical firms.

SOCIO-ECONOMIC CHALLENGES
When planning and deciding to invest on renewable energy, North African countries, and behind them, the entire international development institutions and agencies should take into consideration the enormous socio-economic challenges, which these countries are facing or will face in the near future. The local populations are starving for more equitable and sustainable development, and for more fair distribution of economic development benefits among regions and society members. Any development of renewable energies and local economies should be accompanied with more transparency, democracy and respect of the basic human rights and freedom in the region.

This paper was first published by AfricAvenir as part of a series on renewable energies and their ambivalent impacts.

Dr. Mostafa El Jamea graduated in Engineering (2002). He holds PhD in Sustainable Management of Resources from the Polytechnic University of Marche (2009). He is working as Senior Expert – Renewable Energy, Climate Change & Environmental & Social Compliance at German ProfEC GmbH, and acting as its representative for the MENA region. In this position Dr. El Jamea is also a member of the GVEP International.