Malawi: Of wage strikes and clashes in Blantyre’s streets

About one week ago, civil servants probably did not expect the situation to escalate as it did during past Thursday two days ago in Malawi’s commercial center Blantyre. Originally, Malawi’s civil servants aimed at an increase of their salaries. Meanwhile primary school pupils as well as bystanders took over the situation and went to Blantyre’s streets chanting anti-Banda slogans and demanding the resignation of the country’s current president.

In last year’s April, PP’s (People’s Party) Joyce Banda took over all government issues in Malawi after the sudden death of former president Bingu wa Mutharika. By then Banda found the economic sector of the country in a miserable state since the Mutharika administration fell out with several important foreign donors the country was depending on so much. What followed were among other dramatic developments a devastating fuel crisis resulting from a lack of foreign currency. The country’s economy slid into recession. Therefore shortly after becoming president, Banda instituted several profound economic reforms. In May last year, the country’s currency, the Malawi Kwacha, was devalued by 49% in order to stimulate foreign direct investment and the availability of foreign currency. Just recently during a visit of an IMF mission, IMF mission chief to Malawi, Tsidi Tsikata was reported saying that the devaluation

seems to be stimulating the production of exports and import substitutes while restraining demand for imports.

Nevertheless, most of Malawi’s nearly 120.000 civil servants expressed their dissatisfaction with the new government’s actions. The strikers demanded a 65 % wage increase in order to cope with the increasing costs of living in the country. Since the devaluation, wages have hardly been adjusted to an increased price level.

The strikes almost affected all government institutions and finally lead to the shutdown of the country’s two main airports. National as well as international flights departing the airports of Lilongwe and Blantyre were cancelled and hundreds of travelers of South African Airways (SAA), Kenya Airways and Ethiopian Airways could not proceed their journey. 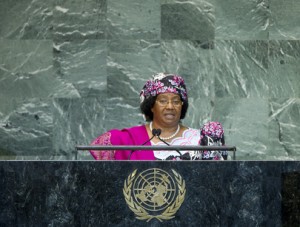 Shortly before president Banda left for an international summit in Equatorial Guinea on Thursday, she told reporters:

Let me stress here that as I am leaving I have left some offer that whatever the case, civil servants should get salary increment.

Currently our wage bill is 97 billion kwacha (179.5 million pounds), and if we agree to their demands, this will almost triple to 276 billion kwacha, which is equivalent to the whole national budget.

Obviously it remains to be seen how the government will get through this current financial challenge in order to restore the normal state in the general civil services.

Although the countrywide strikes of civil servants were large-scaled and shut down public life in many areas, the strikes went off peacefully. But on Thursday some 300 pupils of several primary schools in Blantyre took to the streets and marched on the road to Sanjika Palace chanting anti-government slogans demanding Banda to step down. In the course of the countrywide strikes, many governmental schools were also affected leading to teachers not showing up in class for more than a week. The pupils’ dissatisfaction could be rooted in the fact that they made the Banda-administration responsible for the absence of their lecturers.

On the streets of Lilongwe as well as Blantyre, anti-riot police forces had to intervene to disperse the gathered crowd of pupils. Particularly in Blantyre, the police had to keep the protesting pupils away from storming the Joyce Banda Foundation School buildings.

According to Nyasatimes, observers commented on the protests:

The sad thing is that the President has left the country without sorting out this mess. If kids like this are demonstrating against you, just know that things are not going on well. This is very embarrassing!

While these spontaneous protests went off mostly peaceful, parts of the protest turned violent in Blantyre. In Zingwangwa and Chirimba Townships, angry students and other youths burnt old tyres, stoned by standing cars and installed road blocks. Even a filling station was smashed and almost set on fire after angry students stormed it. In the meantime, students even blocked the country’s biggest main road, the M1, but were dispersed shortly after by anti-riot police. The forces fired tear gas at the crowd in order to restore peace and order.

However, one can recognize that many in Malawi seem to be dissatisfied with the current situation of their country and how things develop. Taken all things of the past week together, the wage strikes, the clashes in Blantyre and Lilongwe, it becomes obvious that the president needs to react on the current unrest in order to return to a normal state of stability, peace and economic progress.