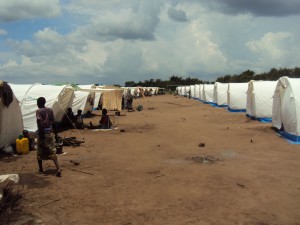 After Malawi was hit by unprecedented flooding in January this year,several local and international organisations responded with various relief items to floods victims who are now in various displacement camps across the country.But as Eufrika team recently found out,following a visit to a Displacement Camp in the worst hit district of Chikwawa,more assistance is needed.

Mchenga Displacement Camp is located outside Ngabu town in the administrative district of Chikwawa,100 kilometres from the commercial capital of Blantyre.

This is a camp which is accommodating 2366 displaced people who came from two Traditional Chiefs,over 30kilometres away since January 11.

They are now housed in 51 tents provided by Trocaire,International Committee of the Red Cross and the Malawi Defence Force.However,the number of tents available appears to be insufficient as the number of people at the camp is huge. 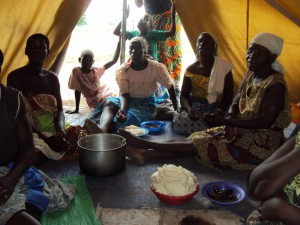 According to Alfred Pakamwa,one of the local people working at the camp,several people who could afford it,relocated to rented houses nearby in search of more spacious accommodation.

“As the camp experienced lack of adequate accommodation spaces due to lack of enough tents,other people went out to rent houses in nearby villages.” said Pakamwa

While one tent is supposed to accommodate 5 people,the situation at Mchenga Camp is different as we saw several tents housing ten to twelve people.

On the day we visited the camp,scores of people were on Malaria treatment since many people are lacking insecticide mosquito nets and exposed to mosquito bites. 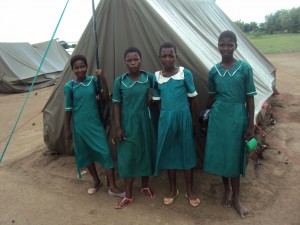 Kitchen utensils are also not adequate at the camp forcing women to take turns in preparing food for their families while others are resorting to communal eating whereby many families cook their food in one pot and eat in groups.

Family life as well as privacy at the camp,has also been disrupted as the women and girls sleep in their section while men and boys sleep together in their own section as well.This means husbands and wives are not able to enjoy their conjugal rights fuelling fears that men could be going elsewhere seeking sex thereby increasing risks of contracting HIV/AIDS.

According to Pakamwa,the camp occupants would welcome any additional relief items like tents,kitchen utensils,beddings,insecticide treated mosquito nets and food items.While in the long term,people would need plastic sheets,iron sheets,cement and land since they are to relocate to an upper land thereby avoiding future occurence of flooding. 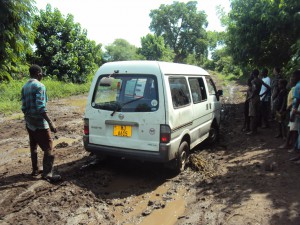 Pursuit of the floods victims plight wasn’t without challenges, Eufrika crew vehicle got stuck in the mud (Photo by Deogracias Benjamin Kalima)

On a positive note,weekly prenatal and antenatal services to expectant and lactating mothers at the camp are provided by mobile clinic teams from the nearby government hospital.There are 144 lactating and 101 expectant mothers respectively at Mchenga Displacement Camp.

There are 13 floods displacement camps accommodating over 80,000 people in Chikwawa district alone.

Deogracias Benjamin Kalima is a Malawian freelance News and Current Affairs journalist.He has been writing for Eufrika online since 2013.