Mandela – The significance of a true example 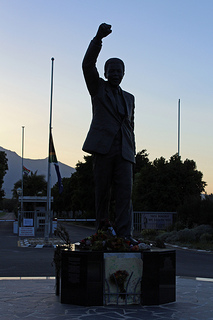 Everyone seems to have their personal story of inspiration. Mine does not differ from the usual, however a recent event made me realise his impact and how greatly it is felt today.

On the 4th of December I volunteered at International Day for Persons with Disabilities at my university. I was part of a group of volunteers at an organisation which deals with issues of disabilities, LGBTI and feminism. There was another group of volunteers. We wore black t-shirts; they wore white (I couldn’t make this up if I tried).

The event went off without a hitch, but later when we were distributing food to the various organisations, it was clear that the organisation of this portion of the day was not adequately taken care of. With hundreds of children and adults to feed, representatives of the various organisations queued up and it started bottle necking faster than the caterers could handle. People started running around trying to see to everyone and I went into micro managing mode. At one point the two groups of volunteers clashed because of the nature of the situation. In the heat of the moment we lost our cool and respect was forgotten. For a brief moment we were not humans, but targets for our temporary rage.

Reflecting on that day, and as crazy as it sounds, I realised how lucky we were to have had that fight. It was less than thirty years ago when that fight, and even that event, would not have been possible.

Sure we’ve been free for nearly two decades and living together in diversity, but this felt particularly exceptional. Race didn’t seem to matter, at all! We were all people of colour, fighting each other. A gay man was arguing about something trivial with a tall black man, women were arguing about how to get soft drinks to the children faster and people were generally just people.

I can look back and laugh now, but of course at the time it was highly stressful and not the ideal situation.

Everyone has their lessons from Mandela. We were all touched by him in some way. It was easy to forget that he belonged to the world, not just South Africans. In a world where people still see the outside before they give the inside a chance, he defied that, when it was not only not cool, but not popular.

We take our freedoms for granted. He didn’t have to go as far as he did when fighting for our freedom. He did not have to make the concessions that he did. He could have stepped out of prison and ensured that some people get their own, and then retired happily or even ruled autocratically for as long as he wanted. This was never his intention, and are we ever grateful for that. An entire event for persons with disabilities with protection in the constitution; guaranteed rights for people of all religions and sexualities; he also fought for all people, black and even white, the race of his oppressors. All these points, as obvious as they are, only really hit home when he passed away. We are so used to the normality of life that we forget how hard he and others fought for what we have now, so that we don’t have to.

When I read about his death, I was angry that I never got to meet, or even just see him. I was too young to fully appreciate him walking out of prison, his fist in the air. It was only much later in life when I started to really understand the gravitas of this one man. As a leader, I don’t think we have ever had anyone as inclusive and empathetic. I felt selfish, but I never got to feel the warmth of those hands, or revel in the spirit which so many have spoken about. But I learned enough lessons from him, as have others, to know that we didn’t need to meet him to remember the enormity of his presence on this earth.

Never before has the value of validation – a handshake, a simple acknowledgement, a smile and a friendly face to simply listen – been as highly prized. He will be sorely missed, even if he was not in the public eye for the latter part of his retirement.

When the two volunteer groups were fighting, I told those in my group to step back and not get involved any further. While we are no Mandelas, nor are we veteran freedom fighters, our leader and father set an example that is never to be forgotten. We would have been a different society had one person, a great man amongst many, had not set his own ego aside for the betterment of many others.

In a moment when blind rage takes over, we are all guilty of saying and doing things that we are not proud of. It would do us all good to look at Mandela and wonder, what would you have done?