The brutal assassination of our colleagues in Hodan makes it impossible for us to continue working in this district of Mogadishu.”

MSF sees itself forced to close down all (medical) activities in the Hodan district of Mogadishu, the capital of Somalia. The termination of the centres cuts the services MSF is providing for Mogadishu by half. The closure includes two separate 120-bed medical facilities where treatment against malnutrition, measles and cholera were given.

Reason for the closure is the shooting of 29 December 2011. When a former employee of MSF, fired earlier that week following suspicion of theft, shot and killed Phillippe Havet and Andrias Karel Leiluhu “Kace”, two internationals. 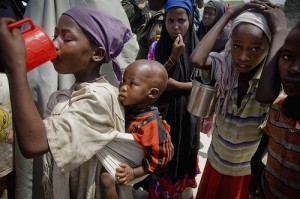 Getting clean water to those most in need, Copyright: UNICEF/Kate Holt

Last August Islamist militants withdrew from Mogadishu clearing the way for 300.000 displaced people, fleeing from the increasing numbers of famine death, searching for food and help in the city. Most of them find shelter in one of the camps in the area where the two MSF centres were based. The Horn of Africa, including Somalia, is suffering from the worst drought since 60 years.

Humanitarian agencies have difficulties to provide aid to people across Somalia. Three quarter of the Somali live in the southern part of the country which is mostly controlled by al-Shabaab; al Qaeda-linked militants who banned many Western agencies from their territory. The Red Cross needed to cancel their food distribution to 1.1 million people in central and southern Somalia, last week, after delivery blockades from al-Shabaab rebels.

The murder of Philippe Havet and Andrias Karel Keiluhu “Kace” was not the only incident MSF was confronted with;. In mid october armed men kidnapped two Spanish aid workers in Kenya, near the Somali border.