Nigeria: It’s Time to Broaden the Debate on Gender 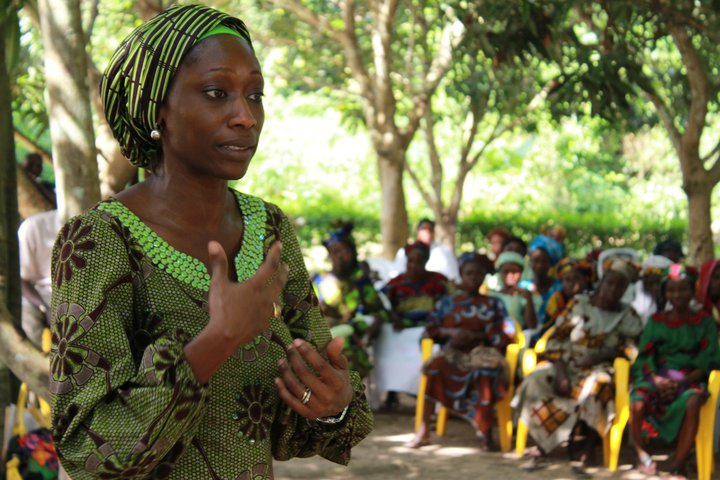 Hafsat Abiola at a women’s empowerment rally in Nigeria. © Projekthope

A new report examines gender inequality in Nigeria, but its narrow understanding of gender blinds it to wider problems and issues.

Discourse on Nigeria’s lacklustre engagement with democracy tends to centre on two main areas of concern: corruption (i.e. poor governance) and oil. Lately, these problems have been joined by Boko Haram’s continued violence in the nation’s Northern and Middle Belt regions.

Yet the problem of democracy extends beyond these issues. A report by UKAid and the British Council, entitled Gender in Nigeria Report 2012: Improving the Lives of Girls and Women in Nigeria, places gender inequality at the forefront of the conversation, emphasising that Nigeria

must prioritise investment in women and girls to ensure that the next generation…[is] more able to contribute to economic growth and development”.

The report provides comprehensive data, which details the significance of gender inequality in various sectors of Nigeria, including health, gender, and the economy. But while the report is welcome, it does not go far enough in examining the notion of “gender” itself.

The report reveals that despite modest improvement, Nigeria has yet to prioritise gender initiatives throughout the country. While the government has signed up to the UN Committee on the Elimination of Discrimination against Women and the Protocol of Rights of Women in Africa, the bills have yet to be implemented domestically. The report’s data states that Nigeria ranks 156th out of 169 countries on the Human Development Index, and that in the northern zones, only 3% of girls complete secondary school.

However, while the report claims to assess “gender” in Nigeria, it focuses mostly on women and girls. When men and boys are mentioned in the report, they are invoked as a contrast to “gender”, ignoring the reality that gender comprises women and men. If we do not acknowledge how both men and women are implicated in gender dynamics, then attempts to improve gender relations – which focus mostly on helping women and girls to ‘realise their potential’ – will fail to address underlying patriarchal systems of domination that affect everyone.

In addition to limiting the discussion of gender by focusing on women and girls, the report also fails to complicate the notion of what constitutes “work”. It stresses that women in Nigeria are under-represented in the formal and the public sectors and finds, for example, that only 29.5% of women are employed in the public sector compared to 70.5% of men, and that the majority of women spend most of their time doing unpaid housework. Many still deny that women’s unpaid labour constitutes “work”; however, economic policies in various Western European nations are beginning to acknowledge care work as a significant sector of the economy.

Therefore, merely recognising that many Nigerian women work outside the formal sector, in care work and unpaid housework, is not enough. We must also call on policymakers to expand the definition of the economy so that it encompasses these informal sectors.

Significantly, the report indicates that issues such as class, religion, and education are inter-dynamic; it suggests that actions to improve gender equality in Nigeria must consider how these elements relate to one another.

However, it remains notably silent on two gendered issues: child domestic labour and sexual identity. This is problematic. In Nigeria, there are an estimated 15 million child labourers. These child workers typically cook, clean, and maintain the order of the household. Most child domestic workers have no familial relationship to their employers and are employed in homes through middlemen. UNICEF has reported that there are as many as 40,000 child domestic workers in Nigeria; but this may be an underestimate. As children are employed in homes rather than public workspaces, this figure is difficult to determine, and there is a lack of transparency regarding their education and general welfare.

The issue of child labour is inextricably bound to the problem of school dropouts – children are often taken out of school to be trafficked or put to work at home. The report shows that dropout rates are higher for girls than for boys, offering such explanations as distance to school, harassment/bullying, fees, and pregnancy. It draws a two-fold conclusion: most girls drop out because the cost of education to parents is too high, or because many schools are perceived to be unfriendly or unsafe environments for adolescent girls from poorer families. But the connection between dropout rates and child labour cannot be ignored, and the issue’s relevance to gender inequality also calls for greater attention. The ratio of female to male dropouts is high; empirical evidence establishing the same for child labourers is needed.

The report ends with various conclusions on how to transform Nigeria by unlocking the potential of girls and women. It calls for the Nigerian government and civil society to promote women’s livelihoods, keep girls in school, improve women’s health and reduce maternal mortality, make politicians more accountable to women, and tackle gender violence and conflict. These conclusions ring true, but somehow the report fails to engage with the crux of the issue of gender inequality.

If the report paints a picture of gender inequality in Nigeria, then we need to examine the question of what constitutes “gender”. We must not shy away from discussing such controversial issues as LGBTQI rights and child domestic labour, and expanding definitions of “work”. These topics remain taboo in public discourse throughout the nation. But if we are to assess and document the different ways in which gender equality is manifested for both men and women, the concept of gender must be broadened.

In addition, we must abandon the notion that women and girls merely need access to opportunities, and recognise that gender equality is about actual outcomes as well. Rather than insisting that women and girls need to be incorporated into institutions that continue to discriminate against them, we need to look closer at what forms this discrimination takes: how they are prohibited from participating in certain roles, but also how their current work is undervalued.

The ‘Gender in Nigeria’ report supplies necessary data on gender inequality throughout the country, but it does not thoroughly investigate the shortcomings of the system into which it would incorporate women and girls.

Maryam Kazeem is a freelance writer exploring issues of gender and race in Sub-Saharan Africa. She holds a Masters in Gender Research from the London School of Economics and currently writes for OkayAfrica. Follow her on twitter @damikazeem. This article was re-published from ThinkAfricaPress.