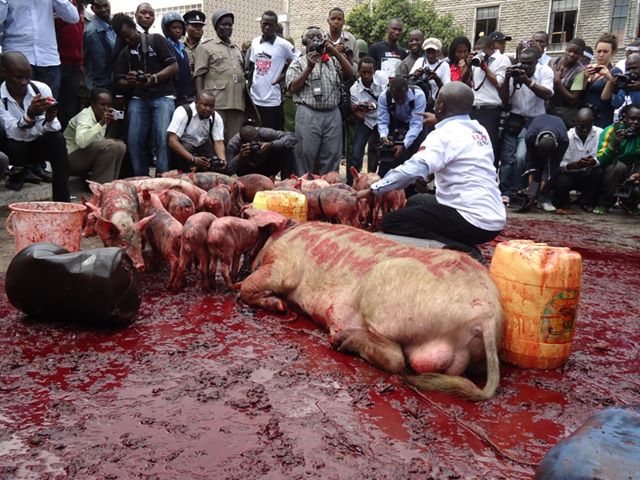 When event organisers published an advert for the event Occupy Parliament, nobody pictured pigs and teargas in the ‘peaceful demonstration’.

The event saw members of the Civil Society carry pigs all the way to parliament, something that saw MPs earn a new name – MPigs.

While blood was sprinkled on the ground for the pigs to feed on, Kenyans were airing their views on social media.

The involvement of pigs was meant to symbolise the apparent greed of Kenyan MPs who have been demanding for higher pay without considering the welfare of Kenyans.

And as the Civil Society protested, Kenyans reacted on Twitter using the hashtag #OccupyParliament.

Some were happy that Kenyans could finally express their opinions and fight for their rights freely:

#Kenya: the democracy will be real, no longer symbolic. #OccupyParliament and previous protests have been a grand manifest.
— Nanjira (@NiNanjira)

The #OccupyParliament in #Kenya with live pigs is really exposing the MPs greed for higher salaries. #MPigs
— Gaetano Kagwa (@gaetanokagwa)

However, the way the Civil society conducted the event did not augur well with a section of Kenyans on Twitter. The symbolism of pigs was deemed as unacceptable by some.

If anything, more people asking, “Where’s the Kenya Society for the Protection & Care of Animals?” #OccupyParliament
- Marcus Olang (@marcusolang)

#OccupyParliament should not use animals. Kenya Society for the Protection & Care of Animals will definitely not be happy with that.— Ochieng’Vincent (@VinieO)

#occupyparliament While am sympathetic with your cause what has those pigs done to you? kenya society of animal protection intervene! — Lucie Waithaka (@luciewaithaka)

The demonstration turned chaotic as police used tear gas against protestors. Again, that ignited fire on social media and the focus shifted from Mps to the Police.

Kenya police are cowards. How can they only police in beating peaceful protesters, and fear facing criminals in Bungoma? #occupyparliament. — Stop Tribal Kenya (@JKahera)

And as the protesters dispersed and the pigs taken away, allegedly by City Council staff, the question remains whether the MPs are going to stop pushing for higher pay.

Pauline Nyumu is a Kenyan journalist working for News24 Kenya.