Foreign Donors in Malawi should “go to hell” – Plot against Mutharika?

The words were dropped last Sunday in Thyolo district in the South of Malawi. President Bingu wa Mutharika ceremonially opened a new road in his tea-growing home district. The opening speech turned out to be a hate speech against foreign donors. Harsh words for every Bingu-critic.

Last Sunday, Bingu wa Mutharika told the public he learnt from intelligence reports that some foreign Donors were currently working hand in hand with local civil right groups. He openly blamed certain Donors of active support of demonstrations and actions against his government. According to the reports there is evidence that foreign governments were planning to overthrow Mutharika’s presidency.

He told the audience:

I want to tell you that this month of March they are preparing, with some money from donors, to stage demonstrations and vigils.” 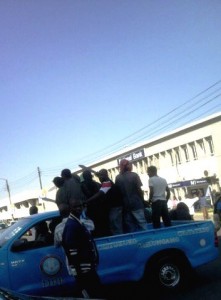 He called upon all government and DPP supporters to resist such plans and activities by every conceivable means. Bingu wa Mutharika asked particularly the so-called DPP youth cadets to remain order in the public space and to “discipline” every protesting opponent. Already days before the July 20 demonstrations of NGOs in Malawi last year, these youth cadets wandered around the cities’ streets to frighten people. That time they were driving around in governmental pick-ups, armed with machetes. During the anti-governmental demonstrations 20 people were shot by police forces. It was the most violent clash during protests in Malawi’s history.

I will not accept this nonsense any more… If donors say this is not democracy, to hell with you… yes, I’m using that word, tell them to go to hell.”

With his speech Mutharika actually added fuel to a fire that looms since 2010. That year the British envoy, Fergus Cochraine-Dyet, was expelled from Malawi because of criticism on the government. With that he triggered off an avalanche. Malawi’s London based top diplomat Gomile-Chidyaonga for his part was also sent back to Malawi. Great Britain froze all development aid to Malawi. This was the beginning of hardening relations between the Southern African state and foreign donor nations.

I am saying if the IMF can just leave me without  pushing me here and there I can sort the issue of forex in 12 months. We are discussing with them. I know the problem more than they will ever know.”

As a leader elected by the people of Malawi, we demand that the President desists from making inflammatory statements which only serve to heighten levels of politically motivated violence.”

The international donor community in Malawi is scandalized by Mutharika’s reproaches. Representatives said they would meet soon to discuss further steps and how to react on the president’s speech.