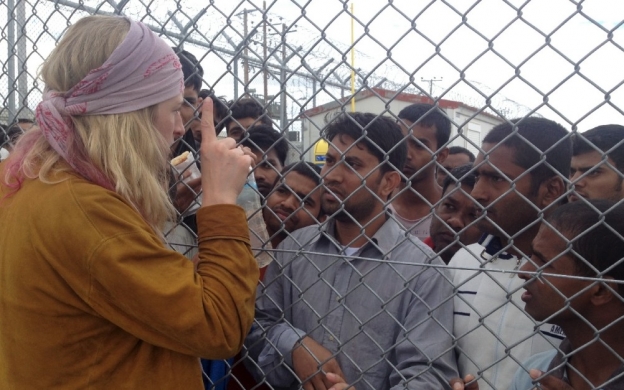 What do a model, the former bassist of a rightist rock band, a fantasy writer who has several times expressed her admiration for Germany’s chief mental arsonist Thilo Sarrazin in the country’s ongoing immigration debate, a streetworker with a potty mouth, a former soldier, and a dropout neo-Nazi have in common? If you can think of a better joke than Germany’s public broadcasting service ZDF, please let me know. The producers at ZDF for their part divided those bizarre characters into teams of three. The contestants are then set the task to reversely travel two routes that refugees frequently take on their way into fortress Europe.

Accompanied by dramatic music, a guy who is introduced as an ‘Africa expert and orientalist’ enters the stage. His name is Daniel Gerlach whome I so far thought of as an respectable journalist since he works as editor-in-chief for zenith magazine. Gerlach will serve as the game master who explains the rules: no mobile phones, no passport – ‘that means: no identity’. The first group, called ‘Team Iraq’, is send on the way from Germany to Iraq via Turkey while the other group which is heading to Eritrea via Italy goes by the name of ‘Team Africa’ (cause you know Africa is a country like Iraq is).

The results of this dimwitted idea can be watched in the TV show Auf der Flucht – Das Experiment (which would probably best translate into English as ‘On the Run – The Experiment’). The producers claim to have found an unconventional way to tackle a socially relevant topic. No doubt about the topic’s relevance. The initial problem, though, is that ‘unconventional’ here means that the show deals with such a highly sensible issue from the perspectives of six wanna-be VIPs who are ‘send on a journey that will change their lives forever’ as the audience is promised by the voice-over at the beginning of the show. In this manner it is little surprising that there is once more hardly any in-depth conversation WITH actual refugees but instead a whole lot of white stereotypes ABOUT refugees and their countries of origin.

In fact, the people who should be the center of attention are granted only a few heavily edited establishing shots in which they are allowed to voice their opinions and feelings in no more than half a minute. By this, the people who actually live in camps under unbearable conditions and embark on perilous journeys during their sometimes years-long odysseys are degraded to extras who make a nicely exoticized setting for the brave German adventurers.

By contrast those lousy ‘main characters’ are extensively filmed as they are disgusted at a bucket latrine in a refugee camp. In another sequence one candidate is filmed vomiting for more than a minute and a half. All this satisfies the voyeuristic wants of today’s primitive TV audience.

Additionally, of course, the candidates reproduce the long list of stereotypes against refugees. The standard arguments such as ‘there is not enough wealth to be shared with everyone’ are still rather harmless compared to the statements by the purportedly repentant neo-Nazi who, for instance, constantly associates black people with HIV/AIDS.

All this is even more disturbing when you notice that the directors believe to have chosen characters whose opinions are ‘representative’ of those that exist among the broader German public. Against this background, the hard facts that are mentioned from time to time (e.g. figures of refugees worldwide) become marginal notes as they are counteracted by the dominant images that imprint on the viewer.

Whenever the candidates feel like quitting the whole thing (that’s the nice thing about their ‘experiment’) their trolley bags are packed ready for take-off. Not only does this further disqualify the program’s self-proclaimed educational mandate to a level that comes close to shows like I’m a Celebrity…Get Me Out of Here and the like.

More drastically, though, reality for refugees does not offer such kind of safety net in which they could easily slump once they have a bad day. Reality for them is more likely to include floating for days through the Mediterranean Sea in a cockleshell without drinking water; torture and mutilation in Libya’s clinks located in the middle of the desert; abduction in the Sinai which might hold gang rape for women and organ harvesting on the part of male refugees; physical abuse by FRONTEX paramilitary forces who welcome refugees to the European border regime that is designed to keep them off at any cost; being driven underground by fear of racist thugs and thus not even being able to apply for asylum procedures.

Part of this reality are also the protectionist policies of the European Union which help to create a global system of unjust economies; lobbyist policies that benefit corrupt dictatorships; policies that allow weaponries to export their lethal products to areas where they fuel further conflict; policies that do not give a fig about keeping climate change at bay; all these elements contribute to the reasons which force people to leave their home places. To blank out all these circumstances for the sake of a reality show is sheer cynicism.

Note: The show has recently been awarded the German TV prize in the category ‘Best Docutainment’, only hours before the first news about the latest boat disaster off the Lampedusa coast came in.

The inspiring example for the show was broadcasted in Australia under the name of Go back to where you came from and has achieved similarly questionable success. Also Danish TV now features the format under the name Send Dem Hjem (‘Send them home‘).

If you still feel like watching the show (in German):