Sinterklaas and “Zwarte Piet” in the Netherlands – Racist Tradition or Colorful Celebration? 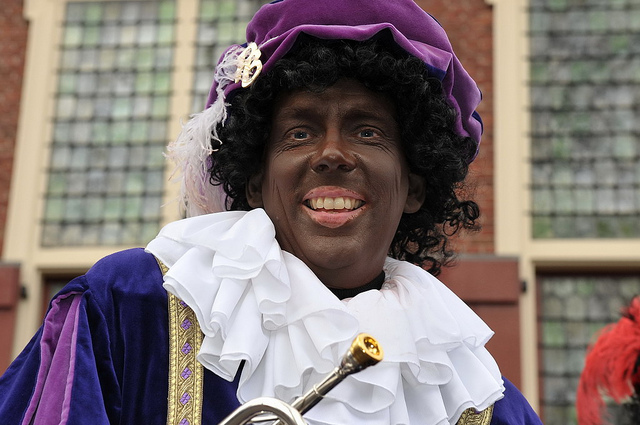 Over the past few years the discussion about the traditional celebration of Sinterklaas in the Netherlands has increasingly become politicized. As Dutch people, who have always loved and still love to celebrate Sinterklaas, it’s very hard to scrutinize your own traditions and behavior when people state that they are offended by them. Of course we can’t speak for all Dutch people, but we do want to share our view on the – now (in)famous – “Sinterklaas-discussion” with you, hoping that more Dutchies will feel the same.

By Fiona Dragstra and Tanja Hendriks

Traditionally, children are told that two weeks before the fifth of December Sinterklaas arrives in the Netherlands. He comes on a steamboat, all the way from Spain, together with his helpers: the Black Petes (Zwarte Piet, in Dutch). You have to behave well – all year round, but especially during this period of time – because Sinterklaas and his helpers ‘record’ your behavior and write it down in Sinterklaas’ book. If you have behaved properly, you will receive many gifts but if you were naughty, Sinterklaas and his helpers will take you with them back to Spain in a jute bag.

In the two weeks that Sinterklaas is in the country you can put your shoe underneath the chimney (or next to the radiator these days) and Sinterklaas, who travels across the rooftops on his horse, will send his helpers down the chimney to put sweets in your shoe. The fact that his helpers are black is because of the soot in the chimney – so we are told. And yes, the helpers are often a little bit silly. Every year, children fear that the steamboat might not arrive because the Zwarte Pieten have lost the presents. Or they lost Sinterklaas’ book. This year they forgot his golden walking stick. In TV-shows these problems are always ‘documented’ and at the last minute a Zwarte Piet saves the day – and the party.

The discussion about Zwarte Piet and the racist tone of this part of the celebration has been there for several years, but never so pervasive and fierce as this year. The movement ‘Zwarte Piet is Racisme’ (Black Pete is Racism) was ever more present in the media and succeeded in starting a national debate. This is impressive – to say the least – especially if one considers that Quinsy Gario, the artist who founded this movement, was in jail last year for wearing a ‘Zwarte Piet is Racisme’-shirt during the arrival of Sinterklaas and hardly anybody seemed particularly touched by this. Many people thought it was a bit over the top and wanted to remain neutral to the whole debate – probably also because we were afraid to think about the consequences for our own much loved tradition.

This year however, we were shocked by the intense reactions of our fellow Dutchies to this debate. Many of our friends reacted in ways that we can only describe as harsh, racist and often plainly cruel. All of a sudden Dutch Surinamese and people from the Dutch Antilles who have lived in Holland for multiple generations were called ‘those negro’s', ‘the blacks who had to go back to their own country’ etc. (We’ll leave the fact that they are already in their own country aside for now). Also, people tried to tone down the debate by saying things like ‘Well I know somebody who is well educated and black and never worried about Zwarte Piet, so your point is invalid’. Whereas first people tried to ignore the debate or dismiss it as ‘multicultural nonsense’, after a few weeks people began to use big BIG words. “We” (whoever that may be) should be ‘protecting “OUR” tradition’.

The overdone and extremely extravagant reaction of Verene Shepperd, connected to the Office of the United Nations High Commissioner for Human Rights, only intensified this feeling. She stated – clearly not hindered by her lack of knowledge of this particular festivity – that The Netherlands ‘doesn’t need another Santa Claus’ and that ‘the minority of the Dutch people who still celebrate this racist party should stop immediately’. As any Dutchie, but also any person who talks to Dutch people every once in a while, knows Sinterklaas is NOT Santa Claus and almost all people in the Netherlands celebrate it (or have celebrated it when they were young). Feeling thoroughly misunderstood by the outside world, the UN was ridiculed for getting involved in ‘OUR innocent tradition’. And also, we think that many Dutch people felt very offended when foreign media started to claim that “Dutch people are Racists”. We have always prided ourselves with our ‘tolerance’ and our liberal image: after all, we are a multicultural country, we have legalized prostitution and smoking weed – what could be more liberal and tolerant than any of that?! It was a slap in our faces: US, RACISTS?! How the hell did celebrating Sinterklaas in our younger years make us into a racist people? The generally shared sentiment seemed to be: leave us and OUR tradition alone, you don’t understand!

But this prompts us to ask: whose tradition? A tradition of people who refuse to listen to other people? A tradition of whites? Isn’t Sinterklaas supposed to be an all inclusive children’s festivity? Aren’t we supposed to feel united in sharing this national feast? Some people will immediately remark that ‘black people also celebrate Sinterklaas’. But we believe that that is beside the point. If this party is supposed to be for everyone, then clearly if people indicate that they feel offended, something needs to change. If the tradition of Sinterklaas – supposed to be a feast for all – no longer does what it is supposed to do, the tradition needs to undergo some changes. After all, that is what happens to traditions: they are constantly reinvented and adapted to suit the needs of society. Reconsidering our tradition and maybe removing some of the elements of Piet that trigger an equation with enslavement (being a black helper made to look like a caricature of black people, helping a powerful white man on a horse and all that) might not be a bad idea. And these kinds of ideas have been popping up.

However, many people also emphasize that they don’t want to simply make Zwarte Piet disappear overnight. ‘What are the children going to ask?’ Since it’s all about keeping the fairytale alive – except for certain elements – we cannot just radically remove Zwarte Piet from the festivities. Eventually, his blackness will fade away (maybe also because soot only leaves traces on your skin and doesn’t make you into a caricature of an African by passing through a chimney) and Zwarte Piet will turn into Piet. Maybe he’ll have wipes of charcoal on his face, maybe he won’t. Some people are proposing to make Pieten (Pete’s) in all colors, not just black ones, and during the arrival of Sinterklaas in Amsterdam this year the Pieten did not wear golden earrings and their lips were not painted bright red. These changes might seem small, but it doesn’t make them any less significant. It demonstrates that more and more people are willing to critically examine our tradition. First steps in these kinds of processes are often baby steps, but those have to be taken in order for the long walk to be eventually completed.

The main focus of the celebration needs to be on the children and their excitement and strong belief in Sinterklaas and (Zwarte)Piet and not on adults who are often to dumb or ignorant to go beyond the (non-existing) barriers of traditions (which change).[1] The heavy discussions were an eye-opener to us in demonstrating how easy people fall back on a racist discourse when they feel threatened in this globalizing world. We were shocked by the narrow-mindedness of many of our fellow Dutchies. The debate opened up a whole new level of (open) racism in our country, which we think, might even be a bigger issue then our children’s celebration. The fact that we can so easily abuse people (on the internet and in newspapers, but anonymous please…) in such racists manners shows people’s true colors – and that is something that needs to be engaged with.[2]

The Sinterklaas celebration and Zwarte Piet in it are just the occasion that led to these racist debates in our society, but they are not the cause. Our society is increasingly becoming less tolerant, not only towards black people, but also towards other minorities such as people of Turkish, Morrocan or Eastern European decent. Our right-wing not-so-democratic-one-man conservative anti-Islam party, some of our right wing media (e.g. ‘Powned’), but unfortunately also the liberal and progressive media who joined in the conversation for the sake of ‘freedom of expression’ only feed into these feelings that apparently, are there. That is what we should really be talking about. Let’s just hope that the celebration of Sinterklaas can evolve from being seen as either a racist tradition or a colorful celebration to being a colorful tradition without the reproduction of racist images.

[1] In 1966 the switch was removed from the image of “Piet” because social mores suggested it was no longer pedagogically sound to threaten children.

[2] In order to demonstrate that this already seems to be happening, we would like to refer to the strong (international) reaction to famous Dutch Gordon singer who abused a Chinese contestant in the TV show ‘Holland’s got Talent’ by ridiculing his descent (Video). A fierce national debate is currently taking place and many people agree that Gordon has crossed a line.