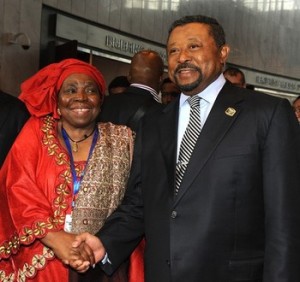 Elections for a new chairperson of the African Union that took place on July 15 saw a contest between the so-called Anglophone and Francophone African regions. The elections that followed a deadlock in January this year were held during the 19th session of the African Heads of State and Governments Summit in Addis Ababa that commenced on 9th July and ended on 16th July.

The current chairperson, Dr. Jean Ping from Gabon, a Francophone country rivaled Dr. Nkosazana Dlamini-Zuma, Home Affairs Minister from Anglophone South Africa. With both receiving support from their respective language blocs, Dlamini-Zuma was quoted by African Sun Times as having denied  speculations that the elections would lead to division in the AU

You are implementing programs that have been agreed upon by everybody, so you are not going to be consulting the Anglophone and the Francophone,” she said.  “You will be taking what they have decided collectively and so implement it without fear or favor … I also think it is something we should eventually walk away from. I am not Anglophone, I’m Zulu.

Dlamini-Zuma becomes the first female chairperson of the African Union and the first to come from Southern Africa where most nations are generally referred to as Anglophone and Lusophone based on colonial language legacies.  However, the elections brought to light alliances. Reports have cited some jovial responses in the Southern African region with Nyasa Times of Malawi reporting that

In the wake of her appointment questions remain on how the language bloc debacle in the AU will be settled but Dlamini-Zuma remains openly optimistic,

I think it would be good to get a change in the AU to try and improve the administration there … We can try and make it a more efficient and effective organization.