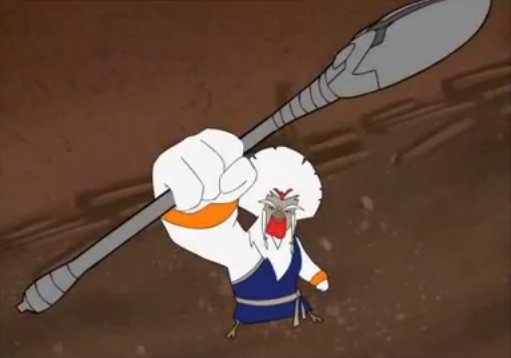 A scene from the short film Chicken Core © Sporedust

A small animation start-up in Lagos wants to bring back traditional African storytelling. Sporedust’s short cartoon Chicken Core will serve as the basis for a TV series or film that is part of the rapid expansion of the creative industries on the continent.

On a small side road a few kilometres from Lagos airport there is a nondescript and rundown building. Behind it stands a smaller two-storey building. Inside, new worlds are being spliced together, universes born, stories hammered out and rendered into moving wonder. Welcome to Sporedust, a studio rising like a digital phoenix out of the Ajao Estate – better known as the birthplace of Nigeria’s other computer skill of renown, the 419 scam.

Compressed into a tiny but thumping studio downstairs, musicians and actors record the speech and sounds that will make up the soundtrack. At the top of the stairs, two writers storyboard a new cartoon that features superheroes that soar through the sky but keep their feet fully grounded in Nigerian realities. Down a short corridor, a room hums with a dozen computers as artists and animators flesh out simple line drawings, colour them and render them frame by frame.

Sporedust Media employs around 30 people, spanning from their teens to their thirties, though there is not always enough money to go around.

We will sit and play video games afterwork, and someone always cooks.”

Often they will arrive by 5-6am and go home late at night. A simple, infectious humour is ever present, along with the high-octane energy levels recognisable in start-ups around the world.

Some of us have given up studies and careers to be here,”

Nigeria’s regular constraints do not spare the animators. In the crowded streets around the studio a religious ceremony starts up, with loud drums and music flooding in. The many sensitive computers used to put the animation together need uninterrupted power.

At Sporedust, there is a veneration for Asian animation. “Studio Ghibli is really important for us,” says Ajulo, referring to the Japanese king of anime, Hayao Miyazaki.

Watching the first few moments of the short film Chicken Core, the visual influence is clear:

But it is not just about aesthetics. “We want to tell African stories, for Africans,” says Ajulo.

Our children are watching so much derivative stuff. Nollywood copies Hollywood. All the music videos you see of Naija music are just copying what you can see on MTV.”

He points to one of Miyazaki’s great strengths, telling epic stories that pull in Japanese history such as Princess Mononoke, the subtext of which is the wrenching psychological impact that industrialisation had on Japanese people, starting off with clear heroes and villains and ending up in shades of grey. This is the level of authenticity they want to inject into their own animation.

Sporedust makes ends meet by doing animation for adverts – the production team is putting a footballer in the green of Nestlé’s chocolate drink Milo through his paces. And it is labour-intensive work, explains lead animator Ekene Agu:

One minute of the advert takes about 200 man hours.”

But the team’s dream is to turn Chicken Core into a feature-length film or television series. Sporedust has already produced a five-minute version to help canvass for investors.

The story itself at its core is African. It’s solid. It has all the characters that African folklore has thrown up”,

I like The Lion King, but Lion King was not an African story. It was a Western story with an African background. That’s my problem with it”.

The group’s technical skills are evident. “When we show this, people ask us ‘Are you sure this was made in Nigeria?,’” says Umogbai.

Nobody draws chickens the way they are drawn here! These characters have gone through years and years of refinement,”

Attention to detail permeates. The king chicken character Wasa is a Sultan chicken, a species found in northern Nigeria that originates from Turkey and has two crests. He wields a magical weapon called the Zurffa, which looks like a spoon. The chickens he leads have been laid low by an evil crow, who is just a cipher for a darker and more mysterious force. The chickens eventually win out, and everyone lives happily ever after.

Except they don’t – the other animals become frustrated at chicken domination, and a new chapter of the story unfolds.

The story tries to tackle a serious chapter in Nigerian history, the uneasy accommodation found between northern Nigerian peoples and the rest of the country.

“But we want to tell it as a PG [parental guidance ratings level],” says Ajulo,

so it is not gory. They use simple kitchen implements – forks, spoons – instead of real weapons, so we don’t chase kids away.”

Sporedust’s managers also want to take on continental-level stories. Chicken Core aims to tackle one of the great stories to convulse the continent in recent years – though The Africa Report has been sworn to secrecy as to exactly which one – binding the morality ques- tions thrown up into the film.

That is one of the things that has been missing in kids’ entertainment. There is no moral lesson,”

If we do it right, make it fun, there will be others who will want to do the same thing. And before we know it, we will have an industry telling African stories the way they should be told.”

Given the speed with which Nollywood has built itself into an international business, this is not just bold ambition. Bibi Bakare-Yusuf, director of publishing at Cassava Republic Press, says:

Nigeria has an imagination deficit. It’s almost a distrust of creativity. We are too scared to think round the next corner.”

In one small corner of the Ajao Estate, the fightback has started.

This article was first published in TheAfricaReport.

Nicholas Norbrook is managing editor of the Paris-based The Africa Report and winner of the 2011 Diageo Africa Business Reporting Awards in the category “Best Newcomer”. Follow him on twitter.

Here is some first-hand info about Sporedust:

Sporedust Media is based in Lagos, Nigeria and began producing animation under the Sporedust brand in May 2012. We are still growing and currently have twenty-five personnel including animators, script writers, background artists, music composers/sound engineers, inkers, app game developers, marketing, strategy, finance and accounting. Some of our staff overlap especially across animation and inking. And one of our script writers plays several roles in voice direction, storyboard development and backgrounds.

[...] There is little info about animation in Nigeria as the industry is practically non-existent. There are tiny silos of animators, but with little funding to meet animation standards, these groups create short clips and never really grow to their full potential. Without an industry, it’s hard to place a finger on animation schools. We’ve heard of a few but we aren’t certain of their capacity or content.

Our animators are self-taught. Our skills were built through observing styles of different animation cultures including Disney from the US and anime from Japan. Additional skills were amassed through tutorials online. But with true love for animation, we grab onto any learning opportunity we can, understand the fundamentals of weight and balance and attune ourselves to animation technology. We used Toon Boom software for Chicken Core: The Rise of Kings.

Interestingly, there is a huge animation community in Nigeria comprised of animation lovers and gamers. You see them at anime swap meetings or gaming tournaments; the latter is periodically organized by our marketing arm. However, this group feeds off foreign content. The love for indigenous creations is greatly supported when short clips like ours are released with numerous positive reviews cheering our cause. But with little backing from a broader industry, there is little continuity.

[...] We know there are skilled animators within the region but there is no solid community aligning our collective ideas. Nevertheless, we are highly optimistic in our goals to “animate the future” and with continued support, we will move beyond these obstacles.”