States of Police in South Africa

The point of this article, which I will pose here, is simple: Who polices the police? It’s an old question that brings up another: Why are we a society that even needs police?

Unfortunately, they are a reality and those who oppose them simply have to live with them. 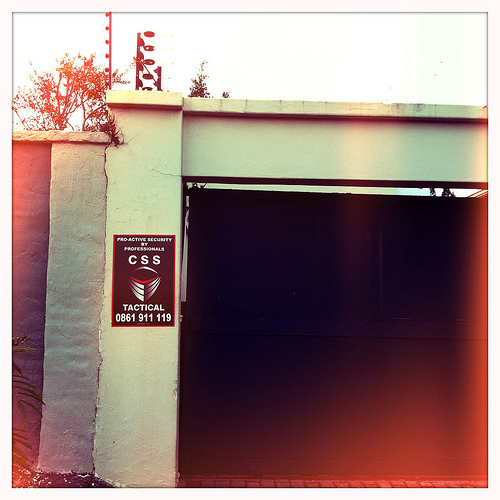 Gated communities and private security companies are perceived as being of increasing importance, © bittegitte

I have had to deal with the South African police in a personal capacity, and was surprisingly impressed with the level of service. They were helpful and cordial. However, a recent incident got me thinking about how the role of the police has branched out in this country. With walled and gated communities becoming an all too stark reminder of the high rate of crime in South Africa, security companies have become a commodity which is seen as necessary to many.

I was a member of the audience on a TV show called The Big Debate in October. I attended with members of my university. We returned to the campus in the evening with a hired bus and were stopped at the entrance by a member of the private security company outsourced by the university. The security guard insisted on seeing student cards even though two other buses passed us in this time, without showing their student cards. The guard was rude, threatened our driver and refused to provide his name.

To throw in a line from a movie, “with great power comes great responsibility”. This could not be more true when your role consists of so much power. With a failure of leadership, it falls to the police and those in charge of keeping the peace to intervene when those at the very top cannot provide peace.

The problem with both security forces, as well as official police, is the lack of training. In our experience, the guard saw fit to threaten our group. The females in the group felt especially offended by this verbal assault. Sensitivity training was clearly lacking here, and this is an all too common sentiment.

South Africa is in danger of delving even deeper into police statedom with more resentment towards the enforcers of the law. This title must not be taken lightly, but this has happened as the “shoot to kill” mantra came about with Deputy Police Minister Fikile Mbalula ahead of the 2010 Fifa World Cup, and later reinforced by Police Commissioner General Bheki Cele. This, of course, came to a head with the widely covered Marikana mine shooting in 2012. It has been called a massacre in the media, and deservedly so. Reminiscent of the 1960 Sharpeville shooting in which police also fired on a crowd of protesters, also protesting for their basic human rights.

Whether it’s a nationalist government during apartheid, or a black majority government during democracy, the role and perception of the police has remained largely static. This is unprecedented for the transient world in which we live.

What I’ve seen with the “shoot to kill” mentality, and the rise in security companies is merely a reinforcement of the need for security, instead of seeking it by ourselves. The incident with the security guard, as well as the larger issues with the South African Police Services, indicates a new, a violently emerging layer of power, beset by cronyism and aggression.  The unfortunate part of this equation, and of society, is that if everyone were to throw down their walls and become vigilant and caring towards their neighbours, the police would no longer be the force that they are. In the state that we are in, the security state will continue to reign as the citizens cower behind security fences and fear.

Ultimately, security guards and policemen are just ordinary people who happen to have weapons and authority. Unfortunately society believes that we still need them, lulling us into a false sense of security. Safety, however, must come from us.

Interestingly, the driver of our bus told the security guard who threatened us that his attitude is the reason why “our people” will always be in the position that they are. This comment was startling as it spoke directly to the divisiveness present when power is given to people in this way. An unnecessary enemy is created, causing paranoia, as evidenced by the Trayvon Martin case in America.

What you get with a violent security force is nothing more than an antagonistic barrier between citizens and social change. Instead of addressing the problems of broken societies, aggressive policing is creating fear-based arrogance, which is merely the salve on a much bigger wound.