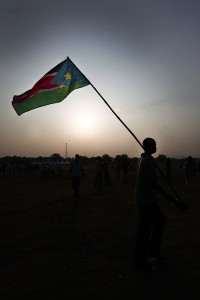 After South Sudan’s official seperation from Sudan in this year’s July, both governments in Khartoum and Juba keep on accusing each other of backing local rebel movements. Recently, there have been attacks and bomb explosions in the South Sudanese area of Guffa in oil-rich Unity State. In an attack on a refugee camp alone, at least six people died. The government in Juba accuses Khartoum to be responsible for the attack. Khartoum for its part accuses South Sudan of financially supporting rebel movements in the border regions at the Sudanese side of the border.

Both the United Nations as well as the South Sudanese government in Juba accused Sudan’s government of bombing areas in South Sudanese Unity State. The target of the bombing was Yida refugee camp, where according to governments officials at least twelve people died in the course of the attack. Moreover current ruling president in Juba Salva Kiir accused Sudan’s government of planning an invasion by its army into the new formed state. Juba uses past attacks as main arguments for their accusation of an upcoming Sudanese invasion and besides that blames Khartoum of supporting the South Sudan Liberation Army (SSLA). The aim of Sudan, as South Sudanese officials claim, is to make the current government in Juba resign. SSLA officials blame it among other things of bad governance and corruption. (eufrika.org reported 3 November 2011)
Meanwhile Khartoum accuses the South Sudanese government of supporting several rebel movements on the Sudanese side of the border. After the declaration of independence these groups found themselves in new Sudanese territory.

The NCP regime, in spite of its continuous attacks and daily atrocities against the daughters and sons of our people through unending violations of human rights, including war crimes and ethnic cleansing, is presently at its weakest – economically, politically and militarily.”

The SRF is calling upon all Sudanese political forces to reject the path of partial political settlement with the NCP regime and adopt a holistic approach for changing the regime’s seat of power in Khartoum.

While this military and political alliance and its statement can be seen as a clear declaration of war, the government in Khartoum for its part denied all accusations of battling rebels on South Sudanese territory and reacted strongly to the SRF’s statement. Obaid Murawah, spokesperson for the Sudanese foreign ministry told Al Jazeera the rebels’ formation was an act which could not be judged as positive for the future development of the region:

Our [the government's] point of view is that if anyone is seeking power they should do so through the election boxes.”

It is questionable at present whether the newly formed military alliance of SRF can really endanger the ruling National Congress Party (NCP) in Khartoum. What it definitely brings is an additional militarization of the border region which are already affected by the Sudanese military’s battle against the rebels anyway. The villagers of those regions presently await an uncertain and dangerous future.

Listen to the complete interview of Al Jazeera with Obaid Murawah, spokesperson for the Sudanese foreign ministry: