Telling the Lion’s Stories: The Rise and Rise of African Film

From international filmmakers, to national film industries, to individuals with iPhones, Africa in film is inspiring growing audiences across and beyond the continent. 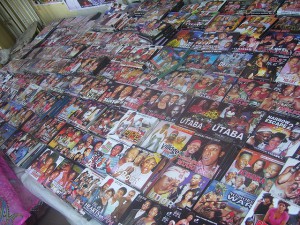 “No-one will be liberated by my films. It’s egotistical and it’s a fallacy to think that,” says South African filmmaker Khalo Matabane after a screening of his documentary Mandela, The Myth and Me. The film − a beautiful, sensitive and uncompromising portrait of privilege, opportunism, cycles of abuse, forgiveness and revenge in post-apartheid South Africa − made waves amongst some audiences who were horrified that it dared to question the wisdom of some of Madiba’s choices and his legacy. But Matabane dismisses the idea of film as a vehicle for social change.

“When I was younger, in my 20s, when I started films, I was fascinated with cinema − I thought it could change the world,” he recalls. “[But] the global system is so complex that it’s impossible to change. You’re never speaking on behalf of the wretched of the earth. People want to be entertained.”

“If you want to change the world, become like Che Guevara; go into the bush and wage war,” he adds.

However, while Matabane may be disparaging about his ability to effect change through his films, in a way he is already part of a movement that is gradually shifting the global landscape.

He is one of a rising number of filmmakers making works about African issues that are challenging preconceptions and resonating with both African and global audiences.

US producer/director Rachel Boynton also fits into this group. Her latest documentary, Big Men, is set in Nigeria and Ghana and explores the actions and mindsets of Texan oil men, mediocre Ghanaian businessmen, and the ‘Deadly Militant Underdogs’ − a desperate group of marginalised ‘rebels’ or perhaps just uneducated, impoverished young men keen to see some of the profits of oil in Nigeria’s River State − as they go about trying to make money from West Africa’s oil boom. With the thrilling levels of access to these groups Boynton managed to secure, Big Men cleverly teases out moral ambiguities, corruption, hypocrisy and humanity.

“I didn’t set out to make a political film or to bring down the oil industry,” says Boynton. “I was first of all looking for a good story. The oil situation is complicated; nothing about this is simple or black and white. It’s not about benevolent, naïve government and an evil oil company or vice versa. Everybody is a little bit clean and a little bit dirty.”

“It’s a morally grey film, as it should be,” she continues . “It’s easy to make a film to show how horrible a person is but if you’re doing that, you’re encouraging your audience not to empathise and you’re failing to look at the system, the structures, the factors that limit and dictate what people can do.”

Getting audiences to empathise is also a key aim of the film Born This Way, according to co-director Shaun Kadlec. Born This Way chronicles the stories of Esther, Gertrude, Cedric and other members of the LGBTI community living in Cameroon, getting up close and intimate. It follows highly perceptive, humane, affectionate and intimate stories and explores what it means to be gay in a country where homophobia is actively whipped up by some churches, and where homosexuality is illegal. But it is careful not to fall back on tired tropes, instead highlighting the resilience and joie de vivre of its subjects.

“I was really inspired by this exciting, incredibly new, buoyant group of people, who despite really difficult situations, were still laughing, creating a gay and lesbian community, finding ways to love,” says Kadlec.

This handful of recent documentaries represents a growing trend of films that treat its subjects carefully and sensitively, and are a far cry from the kinds of simplistic depictions of Africa that have long dominated. Some might argue that the ongoing need for Western producers or support for such films still undermines Africans’ ability to tell their own stories, but Bill Simbo, a Cameroonian LGBTI activist and executive director of the NGO CAMFED, disagrees.

“It’s a complex situation but when the American donors or the European Commission comment on subjects like lesbian and gay rights, then the generic African thinks, ‘This is the Westerner again, the European, trying to promote homosexuality, going against nature…’ but that’s irrelevant. Films like [Born This Way] are so important. They show a human side, a real side, to a complicated issue. It takes lots of courage, time and support to make this kind of movie. Black Africans have the will, we just don’t have…the visibility, the economic power, the reach, the platforms, the confidence perhaps to make films like this.”

Kadlec concurs. He suggests that being an outsider is not without its obstacles, but that the challenge is to be aware of one’s own position and be acutely sensitive to subjects’ stories.

“I have to think about how I am working, day to day, on the micro level, and also the legacy I am bringing to this: my history, America’s history, I am a gay man, raised in a very conservative, ecstatic Pentecostal community in an isolated part of the Midwest. I looked to find similarities with the people I was filming, and always tried my best to listen, to be alert, mindful.”

However, while many of the most widely-viewed films about African issues are still produced with Western support, and although opportunities for African filmmakers are still very limited, this does seem to be changing, slowly but surely. And many of these works are highly challenging.

Most notably of course, Nigeria’s film industry ‘Nollywood’ produces more films a year than any country but India, many of which are highly political and fearlessly devour themes from corruption through to the occult. As Carmela Garritano points out, popular Nollywood films such as Zinabu (1987), Living in Bondage (1993) and Billionaires Club (2005) all clearly critique Western imperialism and emphasise the dangers of greed, materialism and of abandoning traditional values.

More recently, Ghana’s Gollywood has joined the fray, with estimates from the Film Producers Association of Ghana (FIPAG) suggesting there are around 8,000 people working in film in the Northern Region alone. Rwanda’s Hillywood has also come on leaps and bounds in recent years with films such as Grey Matter (2011) and Chora Chora (2012) − two unique, locally-made ‘heavy’ political films − appealing to both local and international audiences. The Kwetu Film Institute in Kigali has meanwhile trained over 100 students.

These new locally-made films seem to have been popular with many African viewers. Clara, a programme manager for an NGO in Dar es Salaam, Tanzania, explains why she thinks they hit the spot with her and her friends:

“They’re incredibly clever, the plots are fast-paced and action-packed,” she says. “We can relate to the characters, they’re all a bit ridiculous, larger than life, and over the top. I’m watching me, watching myself: the jealous possessive mother-in-law, the crazy ex-girlfriend, the ambitious materialist thieving son, the brooding unfaithful father with a younger mistress, the plotting evil step-mother. It’s like Dallas, but with black Africans.”

Across East Africa, film-lovers like Clara can watch Nollywood, Gollywood and Hillywood films in communal shacks at an affordable price. They usually sit on hard wooden benches and in the rainy season audiences have to dodge the drips from the corrugated iron roofs. Screenings are typically played from scratchy pirated DVDs and tend to be rowdy, social events.

Felix, Clara’s brother, explains the appeal for him and his friends: “This is a chance to get out of the house. We know [Nollywood films] are silly, but they also have recognisable settings; their towns look like ours, and there’s that fight, or friction, between witchcraft and the modern life, or the arguments of traditional families and new ideas. They also touch on big things like HIV or illness, which we find difficult to discuss and confront. They give us a vent for these problems.”

Beneath the rise of these African industries, there has also been a noticeable burst of directors shooting films on incredibly low budgets, often on their smart phones and in local transport (tro-tro in Ghana, dala dala in Tanzania, matatus in Uganda).

Early this year, for example, the South African director Errol Schwartz wrote, directed, and starred in The Magic Bullet, a thriller shot entirely on an iPhone, which deservedly took first prize in the iPhone Film Festival. Meanwhile, Nick Asgill from Sierra Leone scooped an award in the Best Trailer category for his subtle political homecoming film Routes To My Rootz, also shot on his iPhone.

Award-winning Kenyan director and producer Kwame Nyong’o specialises in iPhone and short animated films too. Nyong’o supports his filmmaking by making corporate adverts and keeping his budgets low. He says the major hurdle for small, independent producers, however, is finding a distributor.

“I tried distributing using DVDs but it was an uphill task. Printing DVDs is expensive and they can’t be sold at a high price,” he says. His solution was to make his films available through the low bandwidth outlet, Buni Films, based in Nairobi, a move which also gives him the freedom to choose his own themes, formats and politics.

These new forms of films and opportunities are creating new ways for Africans to not only entertain one another but also examine their own communities and tell stories that are relevant to them. Alongside blossoming national film industries and their innovative low-budget counterparts, this endeavour has also been helped by a flourishing of festivals, cultural events, and fora. Uganda, for instance, hosts several annual film and culture festivals such as the Bayimba International Festival of the Arts held in September, and the Manya Human Rights International Film Festival in December, while Tanzania has the annual Mwalimu Nyerere Intellectual Festival held in April at the University of Dar es Salaam, to name a few.

These events give filmmakers and audiences the chance to see what the rest of the world is doing, learn from each other, and forge partnerships. Zimbabweans can compare notes with Syrians, Afghans with South Africans.

In the words of Garnet Oluoch-Olunya, former lecturer in literature at Kenyatta University, these events “breathe life into the backward politics that we’ve been having on the continent since the introduction of neo-liberal reforms.” Meanwhile Muthoni Garland, the founder of Nairobi’s Storymoja Hay Festival, suggests that these spaces are vital for nurturing reflective societies. “My take is that we can’t keep nurturing a culture of intolerance. We’d rather have a mind engagement than a machete engagement,” she says.

Despite the success of Mandela, The Myth and Me, Matabane may still insist that no-one will be “liberated” by his films. However, he cannot deny that together with a growing host of thoughtful, internationally-supported filmmakers, a handful of burgeoning national film industries, and a multitude of plucky creative individuals, Africa in film is on the rise and finding new ways to entertain, inform and inspire audiences both on the continent and across the world.

This article was first published on thinkafricapress.com.

Thembi Mutch, is a freelance journalist, who has been published by the Ecologist, Financial Times and Daily Telegraph among others. She has worked extensively with the BBC. She holds the Prince Rainier Award for Environmental journalism 2007. She is currently finishing a PHD on gossip and media and political participation in Zanzibar. Her areas of interest include human rights, mining, and human  trafficking.