The former vice president is dead, the new president released from jail

Chasowa held a leading position in the student protest this spring publishing a weekly anti-Bingu wa Mutharika and pro-democracy newsletter called the Weekly Political Update. The mysterious death of Chasowa still causes an enormous debate within Malawian public. Various players name different theories about his death. The police for its part gives suicide as a reason for Chasowa’s sudden death. However a postmortem report from the pathologist Dr. Charles Dzamalala proved that the student did not jump from a high building as the police proclaimed but died from an assault to his head with a certain instrument. The report partly said:

The cause of Chasowa’s death was unnatural .. he had severe traumatic intracranial hemorrhage and head injuries with commuted and depressed fractures to skull bones.

This outlines the total opposite of the official police report.

Meanwhile investigators found out that Chasowa annoyed members of the ruling political party DPP with his governmental critical publications. In his weekly newspaper he claimed to get answers from president Mutharika to questions such as why monthly amounts of money are being transferred to his bank account in Australia by the Australian uranium mining company Paladin Africa Limited. In consequence Chasowa got deprived in his freedom of speech. Moreover DPP members suspect that he had been in contact with the former ruling party United Democratic Front (UDF) and few civil society leaders and had been used by them for their own advantage. He refused to stop the publishing, got into a fight and in the end was tragically murdered. 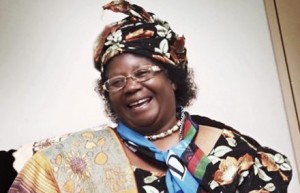 Malawi’s vice president Joyce Banda for her part paid homage to the killed student activist Robert Chasowa during a speech at Masintha Ground in Lilongwe. In front of a large audience she addressed the public:

May I request each one of us to stand and observe two minutes of silence in honor of the fallen hero!

With this comment she basically showed the public that she truly believes in an incidence with external influence and besides that takes up the position of the protesters.

While YDF’s former vice president Chasowa was killed end of September, the current president Black Moses got released from prison for now. Police spokesman Willie Mwaluka said Moses had lately been arrested for his anti-governmental publications in The Weekly Political Update, the same newsletter that killed Robert Chasowa also worked on.

On one hand it is a success for all human rights activists in Malawi that there are evidences and reports being brought to public which certainly prove external influence in Chasowa’s death. On the other hand it shows again that the security situation for activists is still unsafe.