Trans-African Road Tripping: From Lagos to Sarajevo in 151 days 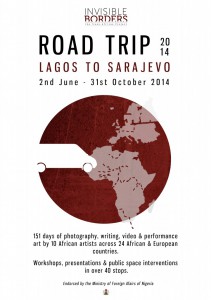 The 5th Invisible Borders Road Trip started on 2nd of June 2014. It is a trans-African project that brings together artists from different African countries through the means of travelling. Trans-Africanism is thereby understood “as a descendant of pan-Africanism, [which] focuses less on the possible ideological unity of African countries, but on the willingness to stumble within the bracket that is Africanness, the bracketed diversity.“ When Corinne Appadoo wrote about the Invisible Borders Road Trip on eufrika.org, the group around Nigerian photographer Emeka Okereke did not yet start their trip. Today (16th of June) the group arrived in Ghana after waiting at the Togo-Ghanaian border for three hours. They will continue their trip through 17 additional countries in Africa and Europe until they will finally arrive on the 31st of October 2014 in Sarajevo (Bosnia).

By now a lot of interesting material has been produced by this year’s participants. For example, the Nigerian photographer Tom Saater shot photos while he was exploring Nigeria’s capital city Lagos on a Keke (tricycle taxi). Personally, the image I like most is that of a Mobil petrol station. In the photo, Tom’s professional background as a documentary photographer who is interested in minimalism is very visible. Though it´s still a representation of an everyday moment in Lagos, it somehow makes me think of a dreamlike situation. Everything around the petrol station is plunged in a deep and blue darkness while the station itself is gleaming in dazzling white. While the filling station attendant in the middle of the station puts fuel into an SUV, he is being observed by two seemingly impatient men. At the same time you can recognize another guy bent down next to some old tires. You immediately begin to ask yourself what he is doing. Is he trying to hide himself? Or did he drag the heavy tires? Why is he looking at the group standing at the SUV? What is he thinking? Then you look at the black car on the left side. Heheee! The car looks a bit pimped: the rims, the blue light in the inner.. But how can someone drive with such flat tires? Don´t worry, everything is fine. Always good. Even though the dark concrete building with its glowing window-eyes in the background is looking like a gloomy watchman. Always good. Just like the slogan of Mr. Bigg´s billboard in the background. 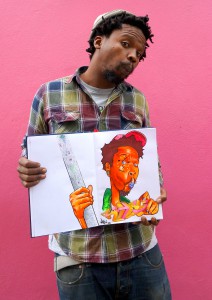 Of course the project focuses on other things besides photography. Writing poems, graffiti, creating films and exploring new regions is just as much part of the project. The project is there to explore new things and diminishing boundaries – in reality and in our minds. You should have a look at Emeka Okereke´s poem “Untitled #X”, Emmanuel Iduma´s great essay “Moving Like You Never Left” or the conversation “Race, Africa and the tricky question of privilege“ between black Kenyan writer Renee Mboya and white South African photographer Angus McKinnon who wants to grapple with his own identity as white African during the Road Trip. Apropos race and identity, I really like the idea of the #mission_paint_the_world_black of Breeze Yoko, a black South African multimedia artist. He wants to paint dreams, fantasy and life´s struggle; the soul and spirits that drive him. He wants to paint the world black because “black to [him] is light, love, life, laughter, hope and healing and we all need a bit of healing sometimes.” Via painting the world black he aims to combat the ordinary notion of blackness as something negative. 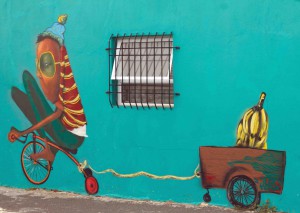 I´m sure that Angus MacKinnon, Breeze Yoko, Dawit L. Petros, Emeka Okereke, Emmanuel Iduma, Heba Amin, Lindokuhle Nkosi, Renee Mboya and Tom Saater will continue to produce great creative and inspiring artistic pieces. Have a look at their blog, follow them on Instragram (@invisibleborders or @everydayafrica) or download their Android and iOS app to follow their project from day to day and in real time.

View all articles by Daniel Koßmann