The first suspected cases occurred in last year’s October. Three months later at end of December already more than 1500 cases of Typhoid had been treated according to Zimbabwean health officials. Only within the first three weeks of this year, another 350 new suspected cases were found. The disease spreads on a daily basis: an average of 30 to 50 cases is reported.

Typhoid fever is a bacterial disease. It is caused by the Salmonella typhi bacterium and is transmitted by food ordrinks that are contaminated by an infected person’s excreta for instance. Symptoms can be among others high fever, headache or malaise. Especially in dense populated areas typhoid can spread very fast and infect many people. 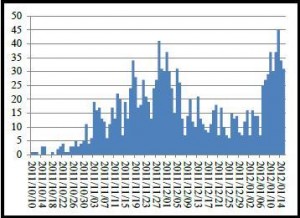 The chronic economical crisis Zimbabwe is already facing for several years contributes its part to the spread of diseases such as typhoid or cholera. While a proper water and sanitation infrastructure was systematically neglected in the past, some suburbs of Harare and other cities in Zimbabwe sometimes go for weeks without running water. Correspondingly the hygiene situation in constantly growing areas such as Harare is getting worse. Often the water is contaminated by human excreta. Most of the dams and important water treatment institutions date back to before Zimbabwe’s independence in 1980.

The progressive deterioration of public health infrastructure have seen such rare diseases like typhoid becoming more commonly encountered within our population.”

After Madzorera appealed to his government for funds for the water and sanitation infrastructure, Finance Ministre Tendai Biti announced the use of $40m from IMF funding.
This repair is long overdue. In 2009 a cholera outbreak affected almost 100.000 people. This outbreak claimed more than 4000 lives. This devastating rapid spread was also caused by bad sanitation and water facilities.

So far the typhoid outbreak did not cause any deaths but it is to be feared that a constant spread and missing hygiene standards will cause deaths sooner or later. It is up to Zimbabwe’s officials to tackle the situation and stem the spread of the disease quickest possible.