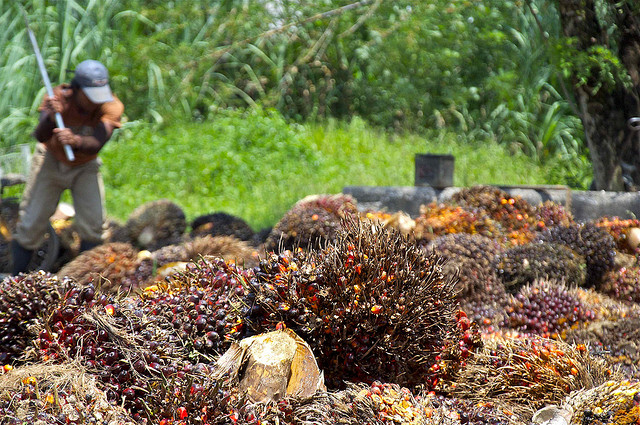 Communities in Liberia’s Grand Bassa County have allegedly come under attack from state paramilitary forces who have been marauding through their villages for days now. A UK-based palm oil company has sought a concession for the land without consulting the affected communities.

This is a press release by the Sustainable Development Institute Liberia.

(Monrovia, Liberia) – The Sustainable Development Institute (SDI) today urges Equatorial Palm Oil (EPO) to cease conducting a survey of customary community land in Jogbahn Clan, District #4, Grand Bassa County pending resolution of complaints by citizens to the Roundtable on Sustainable Palm Oil (RSPO). In addition, SDI calls on the Government of Liberia (GoL) and the local administration of Grand Bassa County to clarify to police commanders that officers must not engage in any activities that are intimidating or threatening to residents of communities who oppose EPO’s expansion plans.

Equatorial Palm Oil (EPO) is a UK-based oil palm company that is listed on the London Stock Exchange. In 2010, the company acquired a 34,500-acre concession in Grand Bassa County, which included the former Palm Bay estate as well as a larger tract of forest land owned and occupied by communities. These communities were not consulted during the signing of the concession agreement, and many have expressed opposition to the company’s expansion plans.

As part of the concession agreement, EPO is mandated to conduct a land survey of the entire concession area. The survey will include land that is under customary ownership and which is used for food production and cultural practices by residents of towns in the district. Eleven towns in Jogbahn Clan, District #4 have expressed opposition to this survey, viewing it as a step towards EPO seizing their land and converting it into an oil palm plantation.

On September 4, SDI responded to an urgent call from a resident of the district, who informed us that the land survey was taking place without the consent of the affected communities, and that a paramilitary unit of the Liberia National Police, the Police Support Unit (PSU) had been deployed into the area after residents attempted to halt the survey. SDI staff traveled to District #4 and observed police presence, including a detachment of the PSU. Community residents reported that armed PSU officers entered towns and villages on the night of September 3 and warned them not to interfere with the survey. The survey team was reportedly withdrawn as a result of the tension.

According to villagers in the area on September 17, PSU officers again entered villages and warned residents that the survey would recommence on September 18 and that no one should attempt to disrupt the survey. On the morning of September 18 residents gathered to begin a march to Buchanan City to present a petition to the County Superintendent. According to some of those that were detained, while in the process of assembling PSU and EPO security officers stormed the assembly point, disrupted the gathering and detained 27 community members. The EPO and PSU officers then drove the detainees to Buchanan City in two vehicles, one belong to the PSU and the other belonging to EPO security forces. The detainees were however released after the Grand Bassa County Attorney stated that he could not find any basis for charging them with a crime. 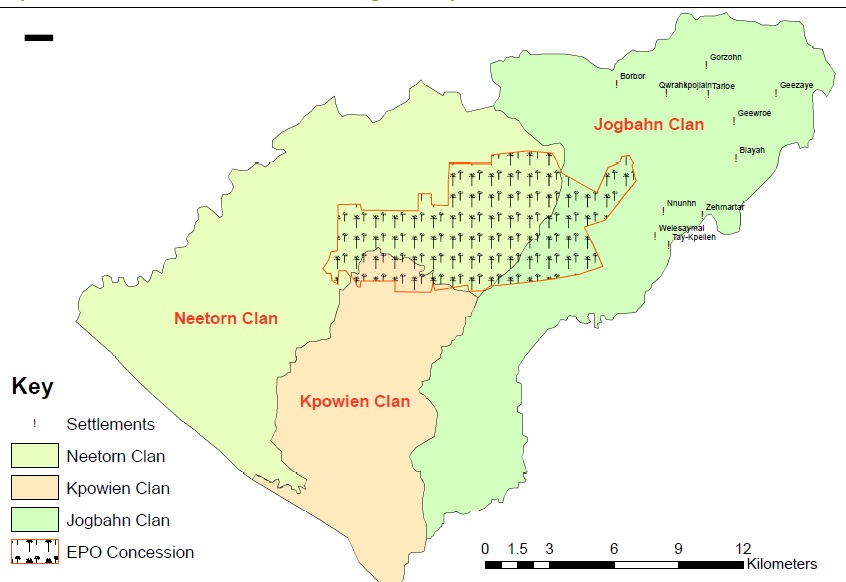 As a member of the Roundtable on Sustainable Palm Oil (RSPO), EPO is mandated to engage in dialogue and negotiations with communities affected by any expansion of its plantation into customarily owned land. The principle of Free, Prior, and Informed Consent (FPIC) is a bedrock principle of RSPO certification standards, and EPO’s unwillingness to acknowledge community opposition to the land survey indicates that it is presently failing to live up to its obligations as a member of the RSPO. Given these circumstances, SDI submitted a formal complaint to the RSPO on behalf of the affected communities on September 18, 2013.

In effort to establish professional and irrefutable documentation to this complaint, SDI documented 363 complainants in Jogbahn Clan, including town chiefs and household heads across 11 towns inside the EPO proposed expansion area. These 363 heads of households registered a total of 2,100 dependents. The complainants have stated that: they do not agree for EPO to survey or clear any more of their customary land; EPO should stop where it has already cleared and planted oil palm; and EPO should not extend any further onto their customary land.

SDI stands in solidarity with the people of Jogbahn Clan, and as the submitting party for the RSPO complaint, calls on EPO to immediately halt the land survey pending a resolution of the complaint and a review of their Standard Operating Procedures regarding FPIC negotiations.

“When the government signs away land entire clans depend on to foreign entities without their consent, conflicts are inevitable and all parties should have anticipated this situation,” says Silas Siakor, campaigner with SDI. “International standards and Liberian laws grant local residents the right to say ‘yes’ or ‘no’ to oil palm or rubber plantation or other development on their land. These rights must be respected by all parties at all times”, he concludes.

Given the tension in District #4 as result of the police presence in the area, and the strong opposition of Jogbahn Clan members to the expansion plans of EPO, SDI is concerned that there is the potential for violence. To reduce the tension, SDI calls on the Government of Liberia and EPO to cease the land survey until an RSPO investigation can be conducted and professional, open, and transparent negotiations are initiated with residents of Jogbahn Clan. SDI further calls on the United Nations Mission in Liberia (UNMIL) and Liberia’s international partners to closely monitor the situation, acknowledging that industry best practices, international and national laws, and principles of peace-building clearly prohibit implementation of projects such as large-scale plantation against the wishes of affected communities.

The views expressed in this article are those of the SDI Liberia and do not necessarily reflect the views of the eufrika.org editorial board.