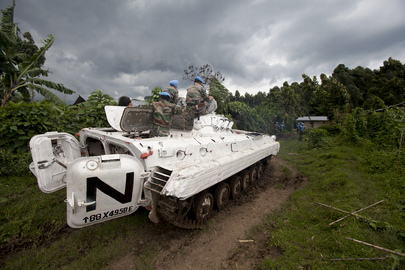 While the main attention was put on the actual preventive actions and the strategic positioning of UN forces of the MONUSCO peacekeeping mission during the last days, official UN statements now confirmed the first attacks on M23 positions.

The Mission attack helicopters used rocket fire and missiles to deter their further advances and to protect the population. MONUSCO is assessing the impact of the operation, which took place in a remote and heavily forested, mountainous area. 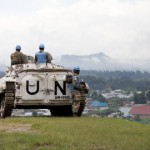 While UN and Congolese forces launched their first attacks, a M23 colonel seemed unimpressed by these efforts to stop the rebels’ advance. He told AFP:

The FARDC are currently attacking our positions, but they don’t know where we are. There’s no problems.

The conflict on the item of the international agenda

While redeploying UN troops to Goma to protect civilians is a positive step, the situation in the North Kivu is so tense that it has the potential to turn into a regional conflict if the international community does not take urgent measures.

During the AU summit which is recently held in Ethiopia’s capital city Addis Ababa, the countries of the Great Lakes Region and the AU member states signed a document which records to create

a neutral international force to eradicate M23, FDLR and all other negative forces in eastern Democratic Republic of Congo.

The fact that the current conflict in DRC’s North Kivu became an important item on the international community’s agenda illustrates how serious the ongoing fighting is taken. But still, more than 220.000 people are already displaced during the last four month of unrest in the region and the international community’s efforts need to come into action as soon as possible. Only if the recent period of warfare can come to an end, it can be prevented that the conflict spreads like a wildfire in the Great Lakes Region.