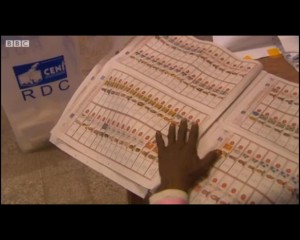 Today’s presidential elections in the DRC were ruled by a general fear of violence. In DRC’s second biggest city Lubumbashi at least four people got killed in the course of an attack of an armed group. They attacked a logistic transport of voting material as well as neighboring polling stations. While these few attacks seem to be the only reported ones in the country so far, delays occurred in different regions due to delayed arrivals of voting material. Especially very hard accessible regions were affected. Voters waited for several hours to make use of their right to vote and were locally disappointed by such delays. Additionally to that heavy rainfalls made the election process in several areas even more difficult.
At this moment, polling stations are mostly closed except these ones which opened delayed. Due to the long distances in the country which is two thirds the size of West Europe and the limited availability of helicopters and usable streets the collection of polling boxes may take several days. An official result of this year’s elections will probably be announced in about a week. How long the counting will finally take is at this moment still unclear.

The heavy rain may have slowed down the stream of voters but there is still a palpable desire to make their choices count.

Police were at the scene – and they were polite and helpful as they directed people to polling booths.

The process has been chaotic, with many people turned away because their names were not on the voters’ roll.
An election observer said that at one polling station, some 5,000 people had registered but only 20 names were on the roll.

“I was here at 5am and now they are telling me to move to another polling centre about 20km away. Who will pay for my transport?” Jasper Mulungi

Some voters said they had received text messages urging them “to bring their own pen” because the ones provided by officials had an ink that “disappears after half an hour” – a rumour that shows the mistrust towards electoral agents and the fear of electoral fraud.