Why did Oury Jalloh burn to death on a fireproof mattress in a German police cell? 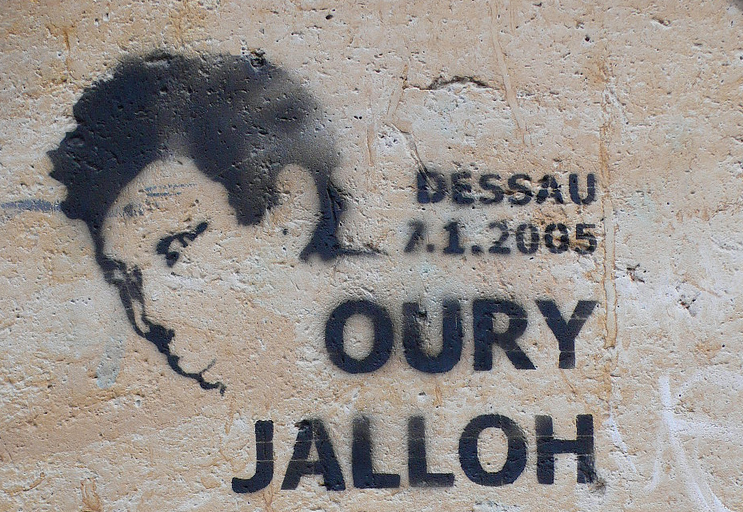 A stencil in remembrance of Oury Jalloh

One of Germany’s most enigmatic post-war lawsuits will have to be reviewed. This post is both a chronology of what is sufficiently proven as well as a list of the numerous crudities that remain.

What is for sure can be summed up in one sentence: On 7 January 2005, Oury Jalloh, an asylum seeker from Sierra Leone, burned to death in a police cell in the city of Dessau.

The narrative that has dominated public dialogue in Germany ever since has followed the official version of events as they were uttered on the very same day by the police. It goes like this:

At night, police were informed by four women who said they felt harassed by Oury Jalloh as he asked them for their mobile phones so he could make a call. Upon arrival, the officers checked Jalloh’s identity. Jalloh’s papers were crabbed and he is reported to have vociferously opposed identification by the police. Therefore, the officers took Jalloh violently to the police station.

There, a doctor certified that Jalloh had an alcohol level of almost three percent. Instead of ordering him to be brought to hospital, the doctor declared Jalloh fit for custody. After being strip-searched by two officers, Jalloh was escorted to a cell in the basement of the police station where his hands and feet were tied down on either side – as recommended by the doctor for Jalloh should not “harm himself”. Against all regulations, Jalloh was left behind alone. Only every half an hour somebody went to check on him. The last control that is officially reported took place at 11:45am.

The officer on duty, who was sitting in a chamber on the upper floor of the police station, turned down the volume of the intercom for he said he felt disturbed by all the noise from Jalloh’s cell. He turned up the volume again after being asked to do so by his colleague. Both of them later stated that they noticed some kind of gurgling in the cell.

When the fire alarm went off at 12 o’clock, this was ignored by the police officer on duty. He later explained that the alarm had gone wrong several times in the previous years (technicians will later doubt this statement). A few seconds later, the alarm went off again.

As the firefighters arrived, they found Oury Jalloh burned to death, hands and feet still bound. The official explanation: Oury Jalloh used a lighter to set himself ablaze. Ponder this: A dead drunk guy, with his hands tied, sets himself on fire on a fireproof (!) mattress?

There is more: The lighter which Jalloh allegedly used was presented days after his death. It was not listed among the evidence. The video tape which documented the search of the cell stopped just when the body of Jalloh was removed – no lighter can be seen. Neither fingerprints or DNA, nor residues of cloth of Oury Jalloh and not even traces of the mattress, which would have melted into it, were detected on the lighter. Instead investigators found traces of polyester-fabric: The request to determinate the origins of these fabrics was dismissed by the court.

“What I had to witness in this court was a state that is no longer under the rule of law.”

Two verdicts later, it is clear that it was unlawful to take Oury Jalloh into custody. The court imposed a fine of €10,800 against the officer on duty for involuntary manslaughter. Yet, many contradictions remain. For instance, new autopsy findings prove that Jalloh’s nose was broken and his ear drums ruptured. Jalloh’s death ultimately, though, resulted from a heat shock. Since Jalloh’s urine lacks hormones that would have been released in a situation of panic (noradrenaline), it is assumed that he was unconscious in the moment that he caught fire.

In December 2008, the other officer was acquitted of all charges. The judge stated:

Yet, we could not detect, what happened on that day [that Oury Jalloh died]. What I had to witness in this court was a state that is no longer under the rule of law. The police officers who don’t seem to feel committed to the rule of law have made a juridical clarification impossible. Those officers, who lied to the court, are people who have no place in this country as police officers.”

Outside court, several hundred demonstrators called for full clarification of the case. Mouctar Bah, the initatior of the “Initative in remembrance of Oury Jalloh”, was targeted by the police. Bah was thrown to the ground and beaten until he lost consciousness and had to be brought to the hospital in an ambulance. The officers stated that they would no longer tolerate the word “murder” with regard to the case of Oury Jalloh, despite a court ruling from 2006 which stated that the police had no legal restraint that allowed them to forbid certain statements during demonstrations. Just recently, the “Initative in remembrance of Oury Jalloh” was accused of defamation. Wearing a t-shirt that reads „Oury Jalloh – this was murder“ is sufficient for an accusal. 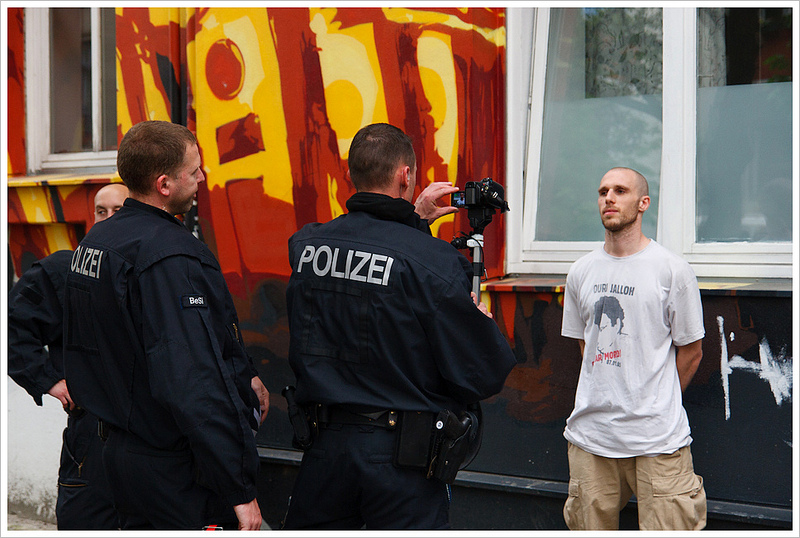 Mal Élevé, front singer of Irie Révoltés, is taken into custody during a demonstration for wearing a t-shirt that claims police to be behind the death of Oury Jalloh. © Montecruz Foto

New report: Combustive agents must have been used to set Oury Jalloh on fire

Now, a new report, paid by the “Initiative in remembrance of Oury Jalloh” and conducted by an independent arson investigator from Ireland, reveals that Oury Jalloh cannot have set fire to himself. Nadine Saeed, a spokesperson of the “Initiative in remembrance of Oury Jalloh”, points out, that at least three liters of combustive agents must have been used in order to burn him and the mattress in the way it was burned, as well as producing the characteristics of the smoke described by witnesses (see video below):

It is normal these days that police officers back their colleagues by suppression of evidence or false statements. Part of this strategy is that certain documents and other exhibits are deleted, falsified, suppressed – or they magically disappear. The deformation of the German police is way more advanced than officials in the Interior Ministry and the Ministry of Justice refuse to believe. Those who speak out this inconvenient truth are marked down as conspiracy theorists.”

It is against this background that many observers draw parallels to the case of the NSU in which the officials are also confronted with allegations of filibuster and numerous failures. Bilgin Ayata, a political scientist at the Free University of Berlin, states:

The disclosure of endemic racist structures among the police and state authorities has reached a degree in Germany that is appalling. In the course of the NSU investigations it has been revealed that policemen founded a German section of the Ku-Klux-Klan in the federal state of Baden-Württemberg, for instance. Moreover, the NSU inquiry commission of the German Parliament that examined for one and a half years the role of the German security apparatus in the context of the NSU provided plenty of evidence for widespread institutional racism. Nevertheless, there is still no engagement with institutional racism in Germany. Even the very inquiry commission that lists a plethora of instances in their 1000 page report, shied away to use the word ‘institutional racism’ in its own assessment. This indicates a resilient political unwillingness to confront racist violence and belief in Germany. The murder of Oury Jalloh has to be evaluated in this context, yet the scope of its brutality and the very location where it happened carries all what we knew so far about the past decades to another level. I have been following the case over the years through the media, and for me, it raises the same question over and over again: how is it possible, that a man whose hands and feet are tied up in a cell, is burning to death in a police station and not one single officer comes to help? What is urgently needed is not only another court trial but a wider public debate about what is left of humanity in light of such inconceivable acts of racist brutality at police stations and elsewhere in Germany.”

It was not the first time that someone died in that particular police station while in custody. In 2002, the homeless Mario Bichtemann was arrested and left in the very same cell where he was found dead the day after. Investigations did not lead to a conclusion and the officers were cleared of all charges. In 1997, another man was taken in custody to the same police station in Dessau. The morning after, he was found dead on the pavement only a few meters next to the police station.

Yonas Endrias, a political scientist at Berlin’s Free University and an afro-German activist who has long observed the trials in the case of Oury Jalloh, states: “The judicial investigation of the case stopped just whenever it was getting interesting.”

In Amnesty International’s view, the National Agency for the Prevention of Torture is not adequately resourced and therefore not able to carry out its functions effectively and in line with the obligations under the Optional Protocol Against Torture (OPCAT). In 2010, the UN Special Rapporteur on torture quoted Germany as one example where the National Preventive Mechanisms (NMP) “are most obviously not capable of fulfilling their task.” The statement further reads that in Germany

the federal NPM is comprised of only one unpaid part-time person and a Joint Commission of the federal States (Länder) consisting of four unpaid part-time members, whose combined annual budget is not to exceed  300,000 EUR. This mechanism is evidently unable to ensure complete geographic coverage of all places of detention. Such approach to the implementation of OPCAT is counter-productive since it does not take the problem of torture and ill-treatment in detention seriously and sets a bad example for other States.”

The German government has long ratified the UN convention against torture. Yet, as Yonas Endrias complaints, “unlike for example in England, we have no independent committees which could control the police.” In fact, only very few complaints against police officers are ever tried in court. The majority of complaints is dealt with internally by the police. Amnesty International therefore demands independent police complaints bodies. Likewise, the Association of Critical Police Officers states:

At present, all of the supervisory systems work rarely or not at all. There is no shortage of role models for independently monitoring boards in Europe – a look to the UK or Ireland is sufficient.”

According to Amnesty International, abuse and excessive use of force by police officers is a common phenomena. Many of those who suffer from this form of violence are “foreign citizens” or Germans of foreign decent. Political scientist Endrias states:

The judiciary is not colorblind. Despite a judicial ban of racial profiling, these ‘suspected independent controls’ remain common police practice in Germany.”

If, for instance, a white prosecutor had died instead, the situation in Germany would be totally different. It’s not a scandal because Oury Jalloh was a black asylum seeker.”

‘Pushed like cattle’ – The Case of Racial Profiling in Germany