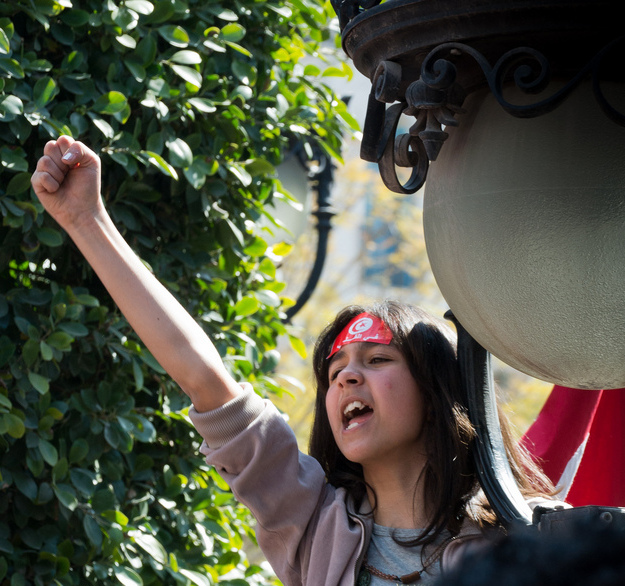 The constitution was voted in during a period when belief in the status quo changing had lost all traction. Due to the security situation, public opinion was dominated by fear. As such, Tunisia’s transition will have to take place on a different level, namely in the field of legislation and legal practice.

Tunisia is famous for its stance on women’s rights, mainly because of its Personal Status Code of 1956. It abolished forced marriage and introduced a minimum marriage age; it got rid of the wife’s duty to obey her husband; and most of all, unlike other countries in the region, Tunisia went so far as to prohibit polygamy and repudiation. These measures were all imposed by the authoritarian regimes without democratic scrutiny. They do not necessarily correspond to what Tunisians actually want.

As a delicate issue which could not be discussed under the authoritarian regime, women’s rights became an important stake right after the revolution. The focus on women’s rights in these debates showed a Tunisian transition demarcated by ideological struggles. It was a battle between, on the one hand, those who wish to hold on to the status quo, perceived as ‘modern’, ‘Tunisian’ and ‘feminist’ with all its positive connotations, and, on the other hand, those who wish to break with the past, which is perceived as too westernized, as corrupting Tunisia’s Arabo-Islamic background, as authoritarian and undemocratic.

The debates are characterised by an extreme fear and vigilance of those who wish to hold on to the status quo where women’s rights are concerned. This fear was fuelled by the formerly prohibited Islamist Ennahda movement gaining 40% of the votes in Tunisia’s first free elections, held on 23 October 2011. It was further intensified by Ennahda’s standpoints and declarations on women’s rights and family law, including particularly polemical issues such as Ennahda’s proposal to offer housewives a pension, to stop state support for unmarried mothers, to abolish adoption and to reintroduce polygamy.

However, such declarations had no consequences whatsoever. For two reasons. First, the interim government lacked the competence to change the law. Their competences were confined to accompanying the country to the next elections, while the assembly had no legislative powers except for drafting some basic laws necessary for the transition (e.g. an election law and a law on transitional justice). Second, and probably even more important as less ambiguous, the government lacked the legitimacy to intervene when it came to women’s rights.

Indeed, every time Ennahda made declarations on women’s rights, civil society and the media reacted fiercely, forcing the movement’s members to take back their words or cover their standpoints in nuance. At no point did the movement carry through any of its standpoints on women that suggested changing the status quo.

In 2012, the working group on rights and liberties within the assembly proposed the insertion of an article stating that ‘women are complementary to men’. This caused an enormous upheaval and was a blow for the legitimacy of the Assembly at large – at large, as the working group did not only consist of Ennahda members, meaning that for once, the critique was not centred on the Islamists alone. But as the competences were actually there to move away from the status quo, the outcome of this proposal was really dependent on the vote within the constitutional assembly.

In February 2014, the final draft constitution was finally voted in. This happened in the context of a political crisis: after the second political murder of a member of the leftist opposition, civil society became more vigilant than ever. Sit-ins in front of the Constitutional Assembly calling for the departure of the government had sufficient support to make the latter compromise: the government would step down and be replaced by a government of technocrats, and the constitutional assembly would finish the constitution (which had already been delayed by over a year).

Under this pressure, together with the pressure from civil society concerning the complementarity article, the assembly decided to leave the latter out. The key article on women’s rights states that ‘The State engages in protecting achievements in the field of women’s rights and in reinforcing them’ (Article 46). This goes even further than what many had hoped for: not only a continuity of the status quo, but a reinforcement of it.

An explanation for this outcome lies in the vigilance of civil society and the particular context in which the voting on the constitution took place. The constitution was voted on in a period where the whole prospect of any change in the status quo, in the field of women’s rights or anything else, had lost all legitimacy. Due to the security situation, public opinion was dominated by fear – fear of change, and fear of the consequences of democratization.

However, the article is ambiguous in the sense that it remains unclear what exactly the ‘achievements’ in the field of women’s rights are, and what ‘reinforcing’ these would entail. Introducing a pension for stay at home mothers is presented in Tunisian debates as reinforcing women’s rights, as is the reintroduction of polygamy.

The importance of the article thus lies in its symbolical character: it shows that at this moment in time, the battle between those who wish to maintain the status quo and those who wish to break away from it is won by the former. However, it has to be seen whether future legislators and practitioners will respect that interpretation of the article. As such, the actual outcome of the Tunisian transition will take place on a different level, namely in the field of proper legislation and legal practice.

Maaike Voorhoeve is a researcher at the law faculty of Amsterdam University. She writes for CAI‘s Gender Issues Unit, where this discussion paper was first published (developed with the assistance of Claudia Forster-Towne and edited by Kate Morgan). Voorhoeve’s book Gender and divorce law in North Africa. Sharia, custom and the Personal Status Code in Tunisia was published this year.

This article is published under a Creative Commons Attribution-NonCommercial 3.0 licence. If you have any queries about republishing please contact us (info[at]eufrika.org). Please check individual images for licensing details.