Kenyan activist Ikal Angelei is among the six award winners of this year’s Goldman Prize which acknowledges members of grassroots movements for their outstanding commitment to environmental justice. Angelei startet a campaign to raise awareness for the threats the planned Gibe III hydropower dam in Ethiopia holds for people and environment around lake Turkana.

Ikal Angelei’s first contact with what has now become a life-time task was while she worked for the Turkana Basin Institute. Learning about the impact which the planned Gibe III dam in neighbouring Ethiopia would have on the predominantly pastoral population around the shores of Lake Turkana, Angelei raised doubts about the project’s real benefits.

Today an estimated half a million people lives nearby or directly with lake Turkana, livestock owning communities just as fisher villages coexist. But the people’s basis of life is severely endangered as the new mega dam is likely to obstruct the lake’s life line, the Omo river, which provides approximately 80 percent of its current inflow. Angelei’s story is not only a story of fighting for environmental justice but also a story of giving a voice to people nobody asked for an opinion. 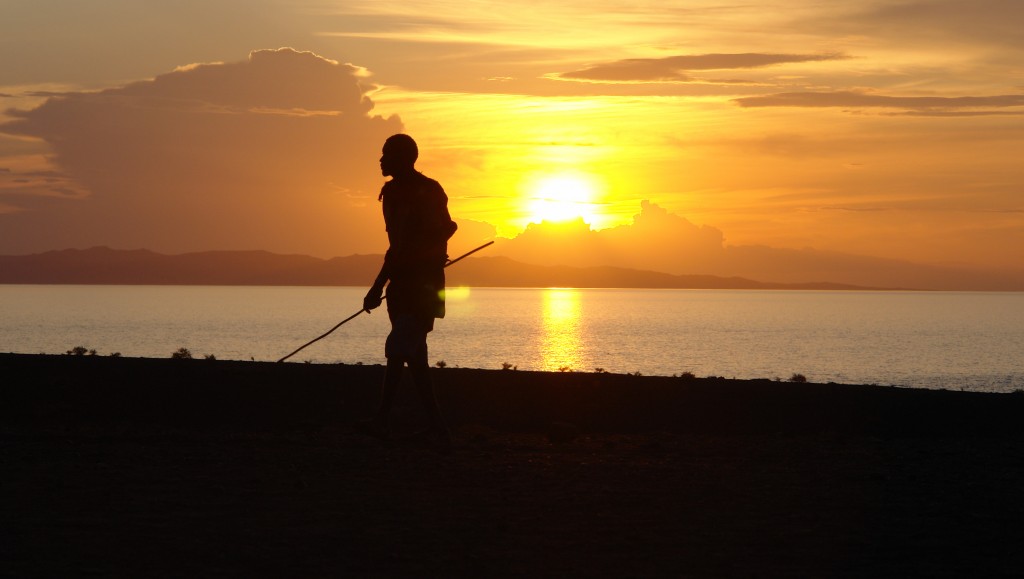 The world’s largest desert lake and also its largest alkaline lake, lake Turkana criss-crosses the dry landscape of northern Kenya and neighbouring Ethiopia like a vital basin, providing water and fish for people all along its shores and far inland. The ongoing construction of Gibe III hydropower dam just north of the lake on Ethiopian territory might cut the water coming in from the lower Omo river by half over the next years.

Unlike most people who live closest to what lake Turkana offers in an area where the literacy rate is barely around 10 percent, 31 year-old Ikal Angelei soon sensed the impeding danger for her home region. Lake Turkana is a so called endorheic basin. Pastoralists depend on water seeping away from it and reappearing inland from its shores. If the inflow of water from the Omo was reduced, so would also be the important sediments it washes up into the lake.

Together with friends, Angelei founded the campaign Friends of Lake Turkana (FoLT) in 2008 to raise international awareness of the dam’s devastating impact on the lake’s ecosystem and on the people making a living from it. Angelei’s first step then was to get into contact with the chiefs of the various local groups who live around the lake but had not been consulted by politicians over the construction of the dam.

While many people stated they did not know about the ongoing construction in 2008 – some didn’t even know what a dam was – elders later signed a declaration which authorized FoLT to encounter the Kenyan government in a law suit. Angelei argues that Kenyan authorities were acting illegaly when they ignored local peoples’ needs as it is mandatory according to the Kenyan constitution. The case is currently still in the courts.

Action seemed to pay out when big stakeholders like the World Bank, the European Investment Bank and the African Development Bank, who all had initially favoured the building of the dam, withdrew their support. The construction site was abondened until Chinese investors signalled interest in 2010. Now the Commercial Bank of China (ICBC) is backing the construction with a $500 Million loan. Further, state-owned Chinese Dongfang Electric Machinery Corp. provides equipment.

Lake Turkana serves as a fishing ground for many people living on its shores, making it a central source of nutrition in a barren region © DFID – UK Department for International Development

Part of the Gibe cascade, the giant Gibe III is seen as a major project in the Ethiopias’s efforts to serve its people with power but also to provide the increasing large scale farming sector with water. It is not necessarily food production at the banks of the lower Omo river that would justify cutting the lake’s water supply. Rather the Ethiopian government pushes farmers to grow cotton, one of the world’s most thirsty plants.

But not only Ethiopia’s president Meles Zenawi wants the dam to be finished “at any cost”. Also the Kenyan government approved the plans as it is keen on receiving parts of the energy which the dam will generate in future to their own country.

The dimensions of the Gibe III dam are huge. More than 240 metres in height, the dam would generate 1,870MW at full flow, making it the biggest hydropower plant in Africa.

Creating conflict potential in a region torn by conclicts

Ikal Angelei does not doubt the energetic potentials of the new mega dam, nor does she condemn technological progress. What she criticizes most is the way in which officials – without bearing in mind ecological aspects – make far reaching decisions over the heads of the people whose lives will be most heavily affected by the project.

The so called Turkana Boy is an impressive example of excavations in the area around the lake. As one of the cradles of mankind it is ranked an UNESCO World Heritage site © Ryan Somma

In their fight against the dam, Friends of Lake Turkana have recently been encouraged by the United Nations’ World Heritage Committee, which admitted Lake Turkana to their program in 1997. The region of the Rift Valley which runs through large parts of Eastern Africa is famous for being one of the cradles of mankind.

Whenever Ikal Angelei takes a rest calf-deep in the cool water at the banks of lake Turkana, she begins to marvel at the beauty of the scenery. It is to preserve this uniqueness of a lively lake in the middle of a desert and the people inhabiting such a bizarre area, what Angelei regards to be the major factor for her not to give up.

Still, the fight David versus Goliath, local fishermen and pastoralists running a desperate campaign against governmental and economic interests, is far from over.

All that partial victories would become worthless if the dam was constructed in the end. From talking to concerned villagers, Ikal Angelei derives little optimism. She rather outlines a devestating scenario and, addressing the responsible parties, she tells the BBC:

Communities that have been benefiting from the flow and the pasture will all have to move to where water is available – you’re creating pressure for conflict in an area that already has a high potential for conflict because of scarce resources.”

Indeed fighting was reported last year between the local Turkana people and the Merille from Ethiopia. The same was true in late 2006, when a long lasting drought forced people from leaving their home lands around lake Turkana. Some migrated far as Uganda, where their appearance was responded by military helicopters opening fire on them.

Each year the Goldman Prize committee announces six winners from all continents who have proved outstanding persistance in fighting for environmental justice. Ikal Angelei’s activism has not yet succeeded finally and it will not prevent the region from the freaks of nature but she surely encouraged thousands of people to stand up for their rights. Amazed by they’re first achievements, Ikal Angelei puts the ingredients of the movement’s success in a nutshell:

We used information. We used opportunity. And we used networks and friends.”