Episode I: Resettlement to the Kivus under Belgian rule 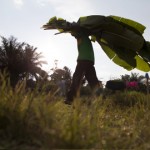 Media reports tend to exclude historic facts in their coverage. In a journalistic environment of word limitations and deadlines, this is an alarming trend.

Particularly when it comes to such enormously complex conflict areas as in contemporary African countries, at no point history should be forgotten. In the Kivus, the Eastern regions of the Democratic Republic of the Congo (DRC), the last hundred years were very eventful and brought various periods of transition for the whole Great Lakes Region.

This article is the first in the new KIVU-SERIES on eufrika.org. It intends to throw light on the disregarded past behind today’s.

Since this year’s April, the North Kivu region in the Eastern part of the DRC is once again shaken by a violent conflict between several rebel movements and the Congolese army FARDC (Forces Armées de la République Démocratique du Congo). And once more this means worrying situations and developments for the whole Great Lakes Region. Neighboring countries see thousands of refugees and within the Kivus, communities need to deal with least as many of socalled internally displaced persons (IDPs).

The several outbreaks of violence during the last decade, too, have often been explained with temporal background events and developments. Articles often do not include the region’s complex and diverse historic past of the last century. But this past is essential for a proper understanding of the regions social composition and local population structures. These have been influenced by several dramatic events.

The four transitional phases in the Twentieth Century

One can distinguish between four main transitional phases that brought fundamental changes for the whole region with them. During all these phases the Congolese borderland villagers faced enormous influxes mainly of Rwandans both Bahutu and Batutsi.

Resettlement to the Kivu Region

The first phase was the systematic resettlement program during the shift from German colonial rule to Belgium administrative mandate shortly after the First World War. According to the Treaty of Versailles, Germany had to give up all its colonies and so it came that the area of present day Rwanda and Burundi became administratively integral part of the Belgian Congo. By then this was already taken over by the Belgian parliament after King Leopold saw himself confronted with accusations of forced labor practices and systematic brutalities. 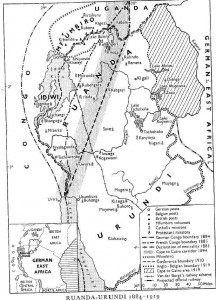 After the Belgians took over German Ruanda-Urundi, they launched huge resettling programs from Rwanda to the Kivus. One reason was among others that they needed a high amount of workers for the plantations and mines in the Congo. These resettled Rwandans were called Banyarwanda. Mainly because Belgian colonialists granted these migrants ‘customary rights’ over local land distribution, high social tensions between the local Congolese population which mainly consisted of autochtone groups and the Rwandan workers emerged. Banyarwanda were accused of taking big advantage of their preference over the local population. Since Kinyarwanda speaking people from Rwanda already lived in the Kivus before, this new arrival of Rwandans strengthened the Banyarwanda’s sense of togetherness. In some communities, this development which was introduced and forced by the Belgian administration meant the first of four main phases of transition in the Kivu regions. First clashes between migrated Rwandans and local communities could be observed and prepared the way for following social clashes and tensions in the region after the abolition of colonialism.

In the next episode, eufrika.org will present the second transitional phases of the Rwandan Revolution between 1959 and 1962 which is also known as Hutu-Rebellion in Rwanda. It will show the sweeping change in the rule of Rwanda and how influenced the whole region and in particular the Kivus.