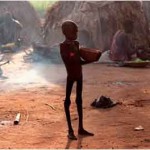 The government of South Sudan warns of a dramatic food crisis. Drought and floods, but also the political instability and huge flows of internally displaced people have led to significant crop losses in recent months, which could now reach a similar extent as the current famine in Somalia and other areas in the Horn of Africa.

Already the youngest nation-state in Africa is missing an estimated 300.000 to 400.000 tons of food in order to ensure long-term supply for the population, Joseph Lual Achuil, Minister of Humanitarian Affairs said.

After rains that initially were expected in April failed, many regions are now suffering from floods that occurred later. Still the tense political situation in the country with several hundred thousands of internally displaced people exacerbated the food situation.

Lual appealed to the international community to take relief efforts following the example of humanitarian intervention in Somalia:

Positive intervention is urgently needed to stop it [the current food crisis] situation deteriorating into a famine similar to that in the Horn of Africa. “

The current food shortage is likely to continue according to the Ministry of Agriculture and Forestry until early next year. New harvests are only to be expected between January and February. The weather forecasts  meanwhile suggest heavy rain to continue till December, which would mean a further deterioration of the current situation.

Particularly affected so far are the states of Jonglei, a densely populated area that is characterized of military unrest, as well as Unity State, which was affected especially devastating by the activities of various rebel groups before the independence of Southern Sudan, just as Upper Nile, where a particularly large number of refugees and returnees stay; Warrap, where according to reports more than 350 people starved in refugee camps already between July to August. Moreover Northern Bahr el Ghazal and border areas with neighboring Ethiopia, in particular some provinces of the state of Eastern Equatoria are affected.