In a report by the BBC News last year, Kenya’s permanent secretary for Information and Communication, Dr. Bitange Ndemo said that technology has the power to change life in Africa as radically as steam changed life in Europe in the 19th Century:

[There is] a new industrial revolution that is coming in this digital age.” 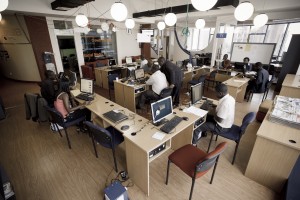 Recently, the ministry of agriculture in Kenya announced that it would go digital in a move to increase productivity and heighten food security. Through their mobile phones, farmers will get information from agricultural officers who will be equipped with laptops and smart phones.

Speaking during the occasion, Kenya’s permanent secretary for agriculture Dr. Romano Kiome said that the application of the e-extension would take advantage of recent advancement of telecommunications and information technology where the percentage of households owning a computer or mobile phone stands at 3.6 per cent and 63.2 per cent respectively.

Beyond disease surveillance, mobile phones can improve public health by connecting people with doctors, reminding people to take medications or take children for vaccinations, and even enabling doctors in remote areas to view, update, and manage crucial clinical records.

According to mHealth Alliance, which champions the use of mobile technologies to improve health throughout the world, Africa has a decent adoption rate of mHealth technologies. The mHealth Alliance recently did a baseline evaluation of the mHealth ecosystem and identified more than 180 mHealth projects in Asia and sub-Saharan Africa.

In particular, Africa had significantly more projects than either Asia or Latin America, and there are countries on the African continent, such as Uganda and South Africa, that have actually put a hold on mHealth pilot projects because there are already so many.

MHealth Alliance says that 45 mobile health projects are active or have already been completed in Kenya alone-more than in any other country. These projects are relying on the number of people who own a mobile phone.

In April, Kenya announced that it had developed an electronic reporting system to speed up the tracking of adverse drug effects and substandard medicinal products. The Pharmacovigilance Electronic Reporting System – said to be the first such initiative in Africa – allows healthcare professionals and patients to report suspected adverse drug reactions and poor-quality drugs by submitting forms electronically. The Kenya Pharmacy and Poisons Board said that the system can be used on desktop computers, with plans to expand its use to mobile phones later in the year.

The airline transport industry is also riding on the wave of digital technology. Kenya Airways passengers can now pay for their domestic flights using Safaricom Bonga points as the telecom opens a new frontier for its customers to enjoy its loyalty programme.

The new partnership will see Safaricom’s subscribers exchange 28,000 Bonga points for a one way ticket – and 40,000 for a return ticket – to fly economy on any of the four domestic routes served by the airline. In the loyalty scheme, subscribers spend KSh280,000 on airtime to qualify for 28,000 points given that a credit of Sh100 earns 10 points. It is these Bonga points that are exchanged for a ticket or other products that Safaricom offers  to its clients.

Earlier in 2009, Kenya Airways and Safaricom partnered to offer customers a ticket payment solution. Kenya Airways customers can pay for their tickets using M-Pesa for a ticket worth less than or equivalent to Sh140,000.

M-Pesa is a money transfer system that is mobile-based. The ‘M’ stands for mobile, and Pesa is ‘Swahili’ for money. Of all the technology-based systems in place so far, M-Pesa is the first to operate on a large scale and win recognition by scooping two international awards in the 2011 ‘Mobile Money Awards’. It is a joint venture between mobile phone giant Vodafone and Kenya’s Safaricom. It was cited as

a legendary business… (that) has made a real difference to the unbanked in that country, bringing about tangible social and economic improvement .

Over 50% of the adult population in Kenya uses the service to send money to far-flung relatives, to pay for shopping, utility bills, or even to pay for a taxi ride home. To use the service, customers first register with Safaricom at an M-Pesa outlet, either a shop, chemist or a petrol station. They can then load money onto their phone. The money is sent onto a third party via text message. The recipient then takes the phone to their nearest vendor, where they can pick up the cash. This has removed the necessity of carrying hard cash, which poses a security risk to many people.

Near field communication (NFC), a contactless payment technology, is also changing the way people pay for goods in shops. In Japan and South Korea it’s been in use for several years, having developed from smart card technology. In Kenya, this is a new phenomenon.

In Kenya, one of the leading banks, Equity, has partnered with global IT giant Google to introduce a cashless commuter fare payment system, BebaPay, which involves the use of pre-paid plastic cards to settle public transport bills. The partnership marks Google’s first introduction in Kenya of its near NFC technology, which it has been promoting in some developed economies.

Equity Bank said during the launch that it is targeting more than 1.5 million Nairobi residents who use public transport daily. All one needs to do is swipe their card on an NFC-enabled phone and the payment is done instantly. Users will get free SMS receipts and can reload cash on the card through M-Pesa, the mobile money transfer technology. Equity Bank CEO James Mwangi:

This system will help eliminate the cost and risk of handling cash…It will also help formalisation of the transport sector because as banks, we can now fund this sector without fear since we will have the financial status statements of the industry players at hand.

The card-based system runs on the Android mobile phone operating system. Users will swipe pre-paid cards against android-based smart phones that will be given to public transport customer attendants.

NFC is a payment system compatible with smart phones powered by Android, iOS, BlackBerry and Windows. The choice of Kenya as Africa’s launch pad for the payment solution by Google highlights the country’s vibrant telecoms industry. The beauty about this is that it is only the bus conductor who needs to have a smart phone; passengers will only need to carry their pre-paid cards to be able to board a bus.

Some of the new agricultural SMS based service providers include MFarm, which provides access to localized, current data on markets and weather as well as a network for buying and selling farming goods through short text message (SMS).

The Kenya Agricultural Commodity Exchange (KACE) has an SMS-based information service, SokoniSMS, for farmers to receive market prices in Kenya.

In 2011, GSMA announced its MFarmer Initiative Fund, supported by a grant from the Bill & Melinda Gates Foundation. The purpose of the Fund is to encourage mobile communications service providers to use mobile communications to provide information and advisory services to smallholder farmers in developing countries who are living on less than two dollars a day. It hopes to benefit 2 million farmers in developing countries by 2013.

These are just a few of the many ways in which digital technology is impacting the lives of ordinary Kenyans. This is a reflection of what is happening in other parts of Africa, where information and technology innovations are popping up at a high rate.

Moses Wasamu is a journalist based in Nairobi, Kenya. He is a graduate of Daystar University, Kenya, World Journalism Fellow 2012, and 2013 Citizen News Service Health Fellow. He writes on media, health, education, youth affairs, religion and new technology. He is published in Kenya, UK, USA, South Sudan and Nigeria.